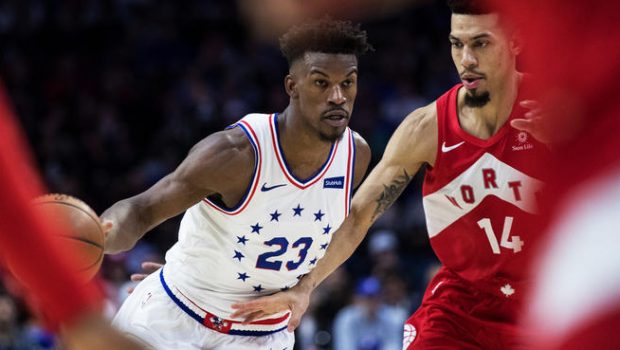 HERE’S WHY THE SIXERS WILL WIN GAME 7 TONIGHT!

The Sixers and Raptors play tonight in Toronto in game 7, with the winner moving on to the East finals against the Milwaukee Bucks.

And so much is on the line for this young team.

So let’s get started:

“His game as he grows his shot and tries to get a better command of his position and deals with the stage of the NBA playoffs—shame on us for thinking he’s going to be all day, everyday.

“Here he is and he’s just going to go knock it out of the park. It’s just not fair.”

The conventional wisdom is that the Sixers have the NBA’s second-best starting five after the champ Warriors.

Jimmy Butler had a team-high 25 points and a game-high eight assists. He also picked Kawhi Leonard’s pocket right before the half and turned it into two easy points.

In a game where Joel Embiid still did not seem quite right or entirely himself— but finished with a plus-40—Butler once more assumed the role Brown fondly and frequently refers to as “an adult in the gym.” The coach dodged a late question after the game about Butler’s pending free agency and the kind of contract he might command but credited Butler with playing well enough to keep the series, and the season, alive when it looked like they were all but buried.

“No boos,” Butler initially said in the postgame press conference. Then he and Embiid, who was sitting right next to him, corrected the record.

“Ah, they booed us a little bit, right?” Butler asked.

“We appreciate it,” Butler said. Everyone in the room shared a laugh with them.

After 82 regular-season games, five first-round playoff games against the Nets and six more second-round games (and counting) against the Raptors, they are either a very good team that should be kept together at all costs this offseason or one that could be a second-round out for the second straight season.