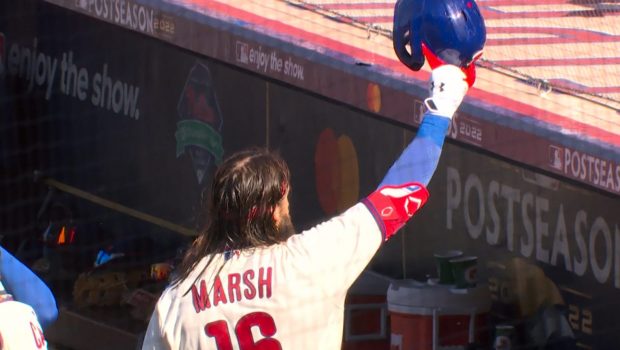 HERE’S WHY THE PHILS HAVE AN NLCS EDGE OVER THE PADS!

The Phillies looked to be in deep trouble heading into the ninth inning of Game 1 of their Wild Card Series matchup with the Cardinals, but they overcame a 2-0 deficit with a six-run outburst in the top of the ninth, en route to a 6-3 victory.

An Aaron Nola gem helped shut out the Cardinals in Game 2, clinching the series and setting the Phillies up for a date with their NL East rivals, the defending World Series-champion Braves.

Splitting the first two games in Atlanta, the Phillies lineup was seemingly buoyed by a raucous Citizens Bank Park crowd, outscoring the Braves by a 17-4 margin in Games 3 and 4 to move deeper into October.

Reigning NL MVP Bryce Harper has carried the offense, hitting .435/.480/.957 over his 26 plate appearances in the playoffs. Jean Segura and Brandon Marsh have also been on fire at the plate, and while other Philadelphia batters have been generally less consistent, multiple players have delivered at least one big hit — for instance, Rhys Hoskins’ three-run homer in Game 3 of the NLDS, or J.T. Realmuto’s inside-the-park homer in Game 4. On the pitching side, Nola has led the way with 12 2/3 scoreless innings of work, while the much-maligned Phillies bullpen has done its job in protecting leads.

The Padres are getting much of their offense from a superstar (Manny Machado), but also from the back end of their lineup, as Trent Grisham, Austin Nola, and Jurickson Profar have combined for 23 of San Diego’s 56 hits in the postseason. Grisham has also been an unexpected power source, hitting three home runs in the playoffs after delivering only a .341 slugging percentage in the regular season. Joe Musgrove, Yu Darvish, and Blake Snell have all pitched well in the rotation, and the bullpen has been almost untouchable. Apart from a disastrous Adrian Morejon outing that saw him charged with four runs without a single out, the rest of San Diego’s relievers have a cumulative 0.73 ERA over 24 2/3 innings.

This well-rounded attack helped the Padres outlast the Mets in the Wild Card Series, as San Diego beat up on Mets ace Max Scherzer in Game 1, and Musgrove and the bullpen held New York to just a single hit in a 6-0 win in the Game 3 clincher. Moving into the NLDS, the Padres exorcised years of demons by defeating the arch-rival Dodgers in four games, winning the final three contests after Los Angeles won Game 1. The Dodgers also held a 3-0 lead heading into the bottom of the seventh inning of Game 4, but the Padres launched a five-run outburst to take the lead and finally claim some bragging rights in the SoCal rivalry.

This is the first-ever postseason meeting between the two franchises.

Philadelphia last reached the NLCS in 2010 (and hadn’t been in the playoffs altogether since 2011), while San Diego’s last NLCS trip came all the way back in 1998. There isn’t a ton of shared history between the two teams, though some bad blood surfaced in June when Snell hit Harper with a pitch, fracturing the outfielder’s thumb and sending Harper to the injured list for two months.