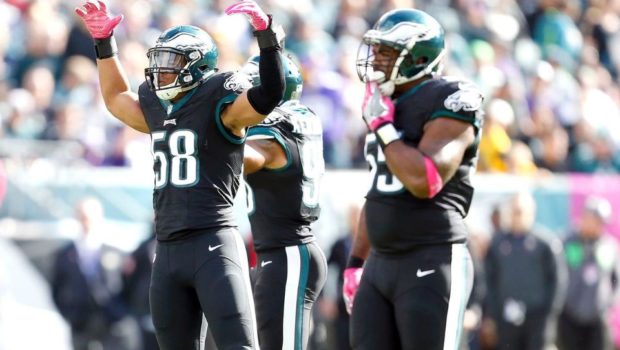 HERE’S WHY THE EAGLES WILL BEAT THE BEARS TOMORROW!

“You want to be getting better at this time of the year,” Eagles wide receiver Nelson Agholor said last Sunday after the win that, combined with the Vikings’ loss to the Bears, got the Eagles into the playoffs. “And I don’t think we’ve reached our potential. I think next week we’re gonna play a better football game.”

In Foles they trust.

“He definitely provides a spark out there,” offensive tackle Lane Johnson said Sunday. “You can see his confidence as soon as he steps out on the field. Nick has been there before and he knows how to play football.”

Last season’s playoff run was somewhat improbable, even with the No. 1 seed in hand. Quarterback Carson Wentz had been an MVP candidate before suffering a season-ending knee injury in December. Few outside the Eagles’ locker room believed that Foles could finish the job started by Wentz. But that’s what Foles did, helping the Eagles to a Super Bowl triumph over the New England Patriots.

He was named Super Bowl MVP, and he orchestrated the three-game winning streak at the end of the regular season with Wentz sidelined by a stress fracture in his back. The Eagles have been a better team this season with Foles on the field — they are 4-1 with him as the starter, compared to a mark of 5-6 with Wentz starting.

“It’s super exciting,” Foles said last Sunday. “Any time you’re blessed to be able to play in the playoffs, and especially the road we’ve had these last several weeks — it hasn’t been an easy ride. We got some help today. It makes it really special. We get to keep playing. We get to wear that Eagles jersey one more time. I’m really excited. The locker room is super excited. It’ll be hard to sleep tonight.”

Foles is scheduled to start against the Bears despite missing the final quarter of the Redskins game with a rib injury. He’d been forced to miss a play on the game-winning drive in a last-second victory at home over the Houston Texans a week earlier after absorbing a hard hit to the chest. But he keeps coming back, just as the Eagles kept regrouping during a trying season in which they had records of 2-3, 4-6 and 6-7.

“There was never a quitting attitude,” Foles said. “Though we might not have been winning all the games we wanted to, guys never gave up, never wavered, kept working, kept believing, kept communicating with one another. Sometimes it just takes time. We talk about adversity, going through adversity. It just shows if you stick together, you lean on one another, you can do great things. We’ve got to keep doing that.”

Safety Malcolm Jenkins has played on two Super Bowl-winning teams, the 2009 New Orleans Saints and last season’s Eagles. Both were No. 1 seeds for the playoffs. But Jenkins said this Eagles team is dangerous even as a sixth seed.

“I don’t know what the advantages and disadvantages are,” Jenkins said. “I think once you get in, all bets are off. Obviously the two times I’ve been part of a championship team, we’ve had a first-round bye. That helps when you’ve only got to win two games [to reach the Super Bowl]. But we’ve seen it all the time where guys fight and scrap to get in and end up in a wild card, and somehow just fight their way through. So for us, it’s a long, hard way. But if you’re saying there’s a chance, then we’ll be there.”

The Bears are a formidable foe, with the league’s third-ranked defense during the regular season and a creative offense overseen by rookie head coach Matt Nagy, who is close to both Foles and Eagles Coach Doug Pederson after being paired with them in both Philly and Kansas City.

“They’re a good football team,” Johnson said. “We know what we’re going against.”

But it’s the Eagles who have Foles. For now, he and the Eagles can put aside the offseason decisions they face, with Foles’s contract containing a $20 million mutual option for next season. They don’t have to fret about the quarterback choice that Pederson will have to make if the Eagles keep winning and Wentz becomes available to play at some point. Foles has stressed a stay-in-the-moment approach since last year’s Super Bowl run. It served him rather well then. Why change now?

“It’s a big stage,” Foles said. “It’s the playoffs. We’re gonna go against one of the best teams in the NFL at their place …. When I simplified things like that last year, it helped a lot. And I’ve learned a lot more since. So I’m gonna pull on everything I know to get ready this week.”