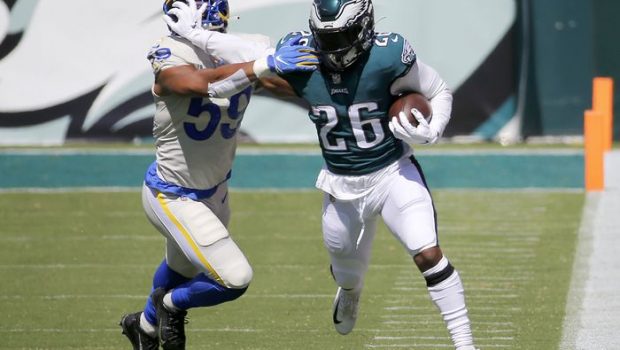 EAGLES WERE IN THE WEEDS FROM THE JUMP AGAINST THE RAMS!

Eagles running back Miles Sanders (above) fumbled early to give the Rams a short field to open the scoring, and that boost let the Rams offense look extremely comfortable.

Only four of Jared Goff’s first-quarter pass attempts (40%) were straight dropbacks, with the team utilizing a spectrum of moving pockets and bootlegs to get him on the move and stress the Eagles defense. At one point, the Rams led 21-3, and though the Eagles were able to make it a closer game than that, it told a more accurate reflection of the gulf between the two sides for most of the day.

Carson Wentz dug the hole deeper with an interception and struggled for much of the game and did so without being under a lot of pressure from the Rams’ defensive front. We saw brief appearances of Jalen Hurts on the field, though not in place of Wentz, rather split out as a gimmick threat on certain plays.

Philly’s usually elite pass-rush was barely able to affect Goff all game, putting him under pressure on just nine of 45 dropbacks. And while Goff did indeed struggle on those dropbacks, there just weren’t enough of them for it to have any bearing on the final score.

Jalen Reagor played most of the game for the Eagles and caught four of his five targets, but the fifth was a drop, which won’t help his PFF grade.

John Hightower played a handful of snaps on offense, too, but we also saw some cameo snaps from Jalen Hurts as the team starts to work him into some kind of role on offense.

Seventh-round pick Casey Toohill played 19 snaps on the edge for the Eagles but was largely unable to make his mark.