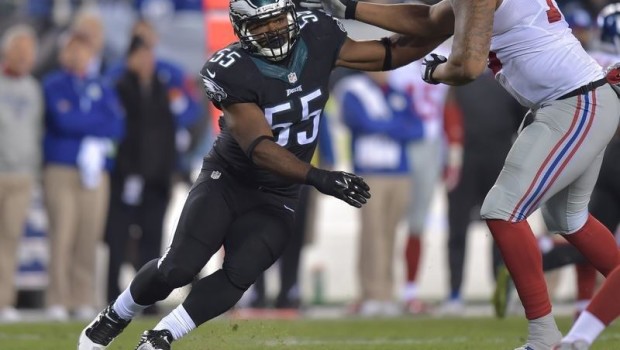 HERE’S WHY EAGLES’ DEFENSE HAS BECOME A DOMINATING FORCE

Brandon Graham has stepped up his game!

It is ironic to some Eagles fans that a Chip Kelly-coached team would better known for its defense than its offense.

But that’s the way this year’s team has rolled, and D-boss Billy Davis saw it coming.

”Mental toughness,” Davis told the AP. ”Mentally tough teams win the most games in the NFL. My whole career, if you have a group, a lot of times it’s a veteran group because they’re usually the mentally toughest, they’ve been through the most. But when your team is mentally tough and can take a punch – with that first drive (for a touchdown by the Giants on Monday night), oh, my God, they’d fall apart. We didn’t. We had a lot of mistakes in that drive. We fixed them all and settled down.

”And our guys are at that place now where you can lose a game, like the Washington game, that hurt a lot because we wanted to step up and win that game, and we didn’t. Now, can you take that punch and come back to work and still believe in yourselves? And the guys did.

”So now we’ve backed it up with two solid games, and now the challenge is can we hold serve? Can we keep at this level this week? It’s all about this week, and can we sustain it? And the mentally tough group can.”

The Eagles’ defense looked like the 2014 version when it allowed Kirk Cousins to go 90 yards for a touchdown on the final drive in a 23-20 loss. Since then. the Birds dominated Drew Brees and the Saints, and Eli Manning and the Giants. Next up is undefeated Carolina on Sunday night.

Manning delivered a punch with an 80-yard touchdown drive to start the game and then never found the end zone again in a 27-7 loss.

The Eagles have improved to 15th overall in defensive rankings, 19th against the pass. They are first in the league in three-and-outs with 24; second in fumble recoveries with eight; tied for second in takeaways with 16; and ninth in negative runs with 15.

”It is a high number,” Davis said of the turnovers. ”But it’s something we focus on … really this year we said our turnovers we’re going for three a game.”

Coach Chip Kelly credits the upgraded roster along with comfort in Davis’ system for the turnaround.

”And the fact that you have a player like Malcolm (Jenkins) that’s held the back end together, and now Walt (Thurmond), Nolan (Carroll), Max (Byron Maxwell) back there, they have been together now. But I think the one thing that Billy has benefited is that continuity we have up front, because you’ve had the same D-line with both of those outside linebackers. That makes a difference.”