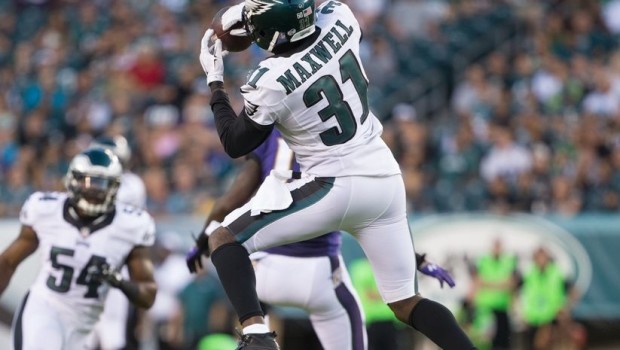 It is comical to hear and read what so many people say about Eagles coach Chip Kelly, especially from 35,000 feet.

And while it is true that Kelly has radically made over his 10-6 team by cutting, trading or not re-signing 10 starters, the consensus among some is that he is crazy.

Kelly wants players who will unflinchingly follow directions, from sleeping patterns to route concepts. The new additions – from Sam Bradford to DeMarco Murray to Byron Maxwell (above) – are as much about changing the physical dynamic of Eagles’ roster as they are about scheme fit.

Kelly’s wishes were clearest in his moves to remake the Eagles’ running backs corps. Shady McCoy, an extremely talented, yet frustrating, back, was dealt for rangy linebacker Kiko Alonso. In McCoy’s place, Kelly signed Murray and former Charger Ryan Mathews, a pair of downhill runners who will follow the blocking scheme rather than dance behind the line.

For all of his talent, McCoy finished seven games last season with an average of under 4 yards per carry, three times finishing games with an average below 1.7 yards. That sort of inefficiency can kill any offense but is particularly damaging to an offense like the one Kelly runs, in which pace, consistency and overall effectiveness trump individual successes.

In Bradford, Kelly saw the talent of a former No. 1 overall pick, a quarterback floundering under bad coaching in a wayward NFL city with little around him in the way of complementary talent. He also saw a passer who, if protected, could thrive in a pace-driven system based on quick decisions and defined reads.

It’s not unrealistic to expect Bradford to have the most efficient year of his career after Mark Sanchez and Nick Foles combined to complete 61.8 percent of their attempts for 4,581 yards, 27 touchdowns and 21 interceptions last season. The question, of course, is not Bradford’s ability to hit a 15-yard out or pop pass, but whether he’ll remain on the field for a full season. Bradford played 16 games once in the past four seasons, including all of 2014 after tearing the ACL in his left knee for the second time in less than two years.

While Kelly needs a healthy Bradford to compete with the NFC’s elite, the Eagles’ makeover in the secondary shouldn’t be overlooked. Despite finishing second in the NFL with 49 sacks last season, the Eagles still allowed a mind-numbing 72 passing plays of 20-plus yards and 18 plays of 40-plus, both league leaders.

With Maxwell and second-round pick Eric Rowe, Kelly got bigger and more athletic at corner, while cornerback-turned-safety Walter Thurmond pairs with Malcolm Jenkins to give the Eagles two rangy coverage options in the back end. Simply aiming for league average play in the secondary could do wonders behind one of the best front sevens in the league.

For all of the genius talk over the past two years, never has Kelly’s reputation been more scrutinized and debated than the past six months. There’s no doubting this Eagles roster better fits Kelly’s vision of what it takes to succeed in the NFL, but whether it even can remains to be seen. In addition to Bradford’s brittle frame, Murray and Matthews have a combined two healthy seasons between them, while Maxwell’s success came in the bubble of Seattle. The best-case scenario could produce an NFC title contender, but the room for failure and the amount of questions attached to Kelly’s makeover are just as great.