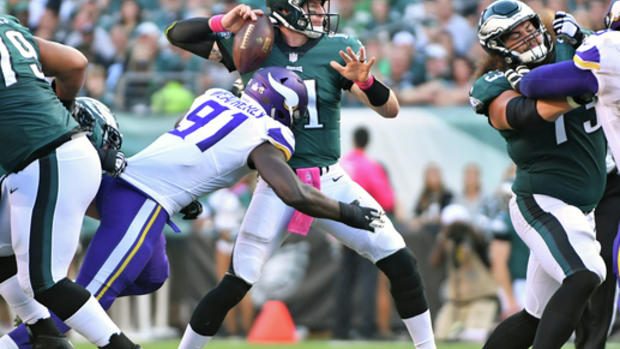 HERE’S WHY THE EAGLES AND THE NFC EAST SUCK SO MUCH!

One franchise is the most celebrated in the NFL. One team has four Super Bowl titles, while another has three. And the final squad? Oh, nothing special — it’s just the reigning Super Bowl champion. So with all that pedigree, all that success and all that attention, why is the most decorated division in football struggling so badly in 2018? This list of eight ugly stats, facts and opinions tries to unravel the enigma that is the NFC East.

Last Sunday the Giants lost by two to the Panthers. Philly lost to Minnesota by the same amount. Dallas forced overtime with Houston and lost on a field goal. Meanwhile, the Redskins went on Monday Night Football and got drubbed by the Saints, 43-19. It’s the first time in five years that all four teams lost in the same week.

After the Eagles lost in the 4:25 p.m. ET game that went out to most of the country, the Cowboys fell on Sunday Night Football. Then the Redskins not only let Drew Brees make career history at their expense (he broke Peyton Manning’s passing yardage record in case you didn’t hear it the 7.5 million times Joe Tessitore mentioned it during the game), they let him almost make other kinds of history too. Brees’ went 26 of 29 in the game. That’s a completion percentage of 89.7, which is the third-highest single-game total since the AFL/NFL merger. On the bright side, they kept Brees from a perfect QB rating, holding him to a 153.2. The highest possible total is 158.3. That’ll show him.

Some teams win a championship that’s so important for the franchise that the follow-up season is rendered trivial. Philly knows what I’m talking about. The team, and the entire city, climbed Everest in February (then the latter spray painted Tom Brady insults at the summit). Getting up for 2018 had to be nearly impossible. It’s simply unnatural to celebrate a life achievement and then immediately get back in the frame of mind to do it again. That’s human nature. Even the Patriots missed the playoffs after winning their first title.

Why is the NFC East so dreadful?