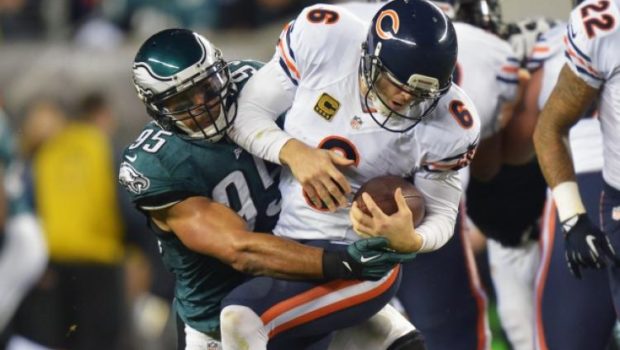 HERE’S WHY THE EAGLES, A 3-PT, DOG, WILL COVER TONIGHT IN CHICAGO

Tonight’s Eagles-Bears game offers a sweet opportunity for smart guys to clean up on the Birds.

The Bears haven’t been a public team for a while, so it’s not surprising the public is siding with the Eagles after rookie quarterback Carson Wentz’s impressive debut — though it was against the Browns.

This line opened Chicago -2.5 at the Westgate Las Vegas SuperBook and several other Vegas and offshore books, and as low as -1 at offshore giant CRIS. Early sharp bettors jumped on the Bears, laying under a field goal. Some books went to 3.5, and that’s where those who like the Eagles jumped in. The current line of Chicago -3 (-120) is where the books are getting the most balanced action.

The NFL Vegas Rankings that we’re a part of at ESPN Chalk have the Eagles as half a point better than the Bears on a neutral field, so with Chicago’s home-field advantage, we made the argument that the Bears should only be favored by a point or two and that there’s value on the Eagles +3 (and obviously even better if you can get +3.5, which was still available at some books on Sunday morning and on most parlay cards). However, I can make a case that the Bears shouldn’t be getting any points for home-field advantage.

Last year, they were 1-7 straight up and 1-6-1 ATS at home. In addition, in the only two games where the Bears were home favorites (against Oakland and Washington), they lost both games outright. My only ATS loss in Week 1 was the Bears, and I’ll probably take them as underdogs down the line, but I have no problem fading them as undeserving home faves in this spot.

Both of these teams expect much better results on the defensive side of the football in 2016. Last year, the Eagles finished 30th in the NFL, allowing 402 yards per game, but former coach Chip Kelly’s tempo grinded away at the stop-unit’s bite. There’s still talent on this defense, led by Fletcher Cox as new defensive coordinator Jim Schwartz will again field a much stronger unit.

Meanwhile, the Bears radically changed direction under new coordinator Vic Fangio last season. They finished 25th, allowing 5.6 yards per play, and the personnel simply didn’t fit the scheme. The Eagles will most likely play a conservative brand of football on the road with Wentz. Last week, the Eagles ran the ball 34 times and as this offensive line is much stronger this year. I think the Eagles will take the load of Wentz leading to a lower scoring field-goal type contest.