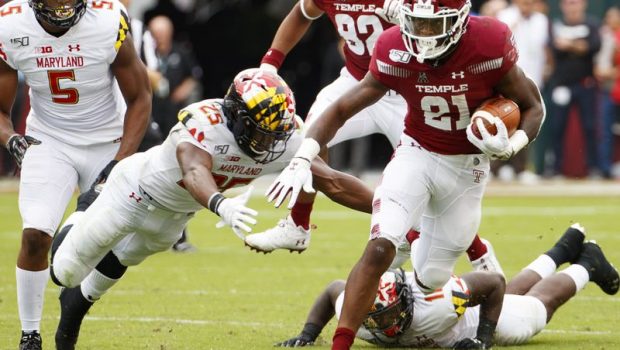 HERE’S WHY TEMPLE IS A BIG FAVE TONIGHT AT EAST CAROLINA!

The Temple offense has been centered around leading rusher Re’Mahn Davis and backup running back Jager Gardner. Davis has rushed for 346 yards and three touchdowns in four games this season. Gardner has also been a key contributor with 238 yards and two touchdowns on the ground. In the win against the Yellow Jackets, the Owls generated 198 rushing yards mostly thanks to Davis, who ran for 135 yards on 29 carries.

With East Carolina ranking 67th in rushing defense, expect Temple to play to its strengths and pound the football in a tough road environment. If Temple can run the football effectively, that should open up the passing game for quarterback Anthony Russo. On the season, Russon has thrown for 1,071 yards, 10 touchdowns, and six interceptions.

On paper, East Carolina’s offense hasn’t been great during its first five games. The Pirates rank 94th in the nation in total offense, averaging 370.8 yards per game. They also rank 107th in passing yards per contest with 197.4.

Holton Ahlers has struggled to get the Pirates’ offense going despite their two consecutive victories. He has thrown for 913 yards, four touchdowns, and five interceptions. With Reid Herring recently transferring, East Carolina doesn’t have much choice but to stay with Ahlers under center.

Temple’s defense has been among the best in college football so far this season, so scoring points could prove to be challenging for East Carolina. The Owls rank 19th in total defense, allowing 283.8 yards per game.

To come away with the upset, East Carolina will need a big game from Demetrius Mauney and the rest of the running backs. If Ahlers has to throw the ball more than 30 times against Temple, it could be a long night for the Pirates.

With three victories already this season, East Carolina has matched its total from each of the past three seasons. While the Pirates have certainly improved, it could be tough keeping up with the Owls on both sides of the ball.

Temple has more depth at the skill positions and the Owls’ defense has smothered opponents. Maybe there’s a chance East Carolina can stay in the game playing at home, but Temple should be able to come away with the victory.

The last time the Pirates played a team that loves to run the football, their defense gave up 315 yards to Navy in their third game of the season. Thursday’s game could have a similar outcome.