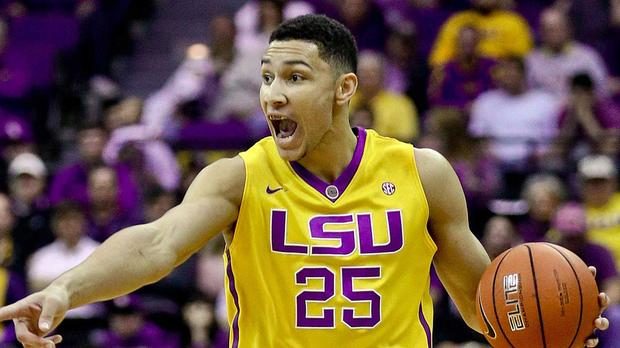 HERE’S WHY SIXERS WILL TAKE BIG BEN SIMMONS WITH THE 1ST PICK!

The Sixers have the top pick in Thursday night’s NBA draft, and the smart money says they’ll be picking LSU’s Ben Simmons.

The 19-year-old Australian has been the top guy on almost every 2016 Mock Draft board for more than a year, a combination of size and passing ability rarely seen together. Ever since he popped at adidas Nations in 2012 as a 16-year-old that led his Australia team to a strong showing, everyone in basketball knew that Simmons would be one-and-done in college. And it was thus, with only his choice of school — his godfather was an assistant head coach at LSU — a minor surprise, making the Tigers a preseason Top 20 team.

And despite a season that can only be viewed as quite disappointing — the Tigers didn’t make the NCAA Tournament and declined an NIT bid — Simmons is still expected to go first overall.

Simmons is compared most often to Lamar Odom, who was taken fourth overall in the 1999 Draft after one year at Rhode Island. Like Odom, Simmons is a pass-first lefty who can score, but is more often moved to move the ball. It doesn’t mean he can’t score; Simmons averaged 19.2 points per game, along with 11.8 rebounds (seventh-best in the country), en route to first team all-SEC and SEC Rookie of the Year honors, along with being named a consensus all-American.

However, his is a game that may require discretion and patience for fans of the team that takes him. This is not a player who’s likely to lead a 20-win improvement next season for a Lottery team.

More than a few scouts don’t expect Simmons to come in and dominate right away. And that could be difficult to explain to fans of a team that’s using the first pick overall on him. A franchise like the Sixers, for example, whose fans have had to wait on the likes of Joel Embiid and Dario Saric, may be hard-pressed to pick Simmons if the payoff isn’t immediate and there are other players whose impact would be felt quicker.

Simmons was efficient this season (shooting 56 percent overall) and he was consistent (22 double-doubles). He had some monster games, too, including 36 points and 14 rebounds at Vanderbilt and 28 points and 17 rebounds at Florida. He was also fourth in the nation in free throw attempts (297).

But LSU was just 11-8 in conference play, and went out quietly in the second round of the SEC Tournament to Texas A&M, in an embarrassing 71-38 rout. There have been players taken first overall whose teams didn’t make the NCAA Tournament the year they were drafted, but it’s been quite rare lately — only Pacific’s Michael Olowokandi, taken first in 1998 — has gone first under such circumstances since the NCAA Tournament expanded to 64 teams in 1985.

Simmons will thus require a different kind of thought process for the team that takes the leap.

“You have to build your team around his strengths, because it’s a unique skill set he has,” a Central Division evaluator said. “You have to make sure the players around him fit. He doesn’t have a game that you can just plug in and play with any roster. The shooting piece, he’s going to have to improve upon. He has a world of talent, big-time talent. But it’s going to take time to see how he fits and who fits around him. For him, he’s going to need some other guys around him. He can score, but he’s also not wired to get 30 every night. He wants to pass.”

Simmons has lots of intriguing pieces — huge hands, along with an ability to finish with either hand in the paint (he was top 20 nationally in PER). And like Odom and other big passers, his size allows him to see over most players guarding him, giving him different passing angles than most — and an ability to try higher-risk, higher-reward passes.

In the pros, teams could use him at either end of a pick and roll — as the ball handler or the screener. Either way, off the switch, he could have an advantage. And while he’s not a classic low-post player, he could be dangerous passing out of the post, either to cutters, or across the floor if he can consistently warrant double teams.

But he’ll have to expand his range — he shot just 33 percent on 3-pointers at LSU — to be a threat defenses have to honor as, for example, a pick-and-pop player out the screen and roll.

And, Simmons will have to bring it every night. Defensively he was no great shakes, but that’s common for a lot of college players, even the elite ones. But that’s different from not putting your mark on a game, making sure everyone — teammates and opponents — know who the best player on the floor is on a given night.