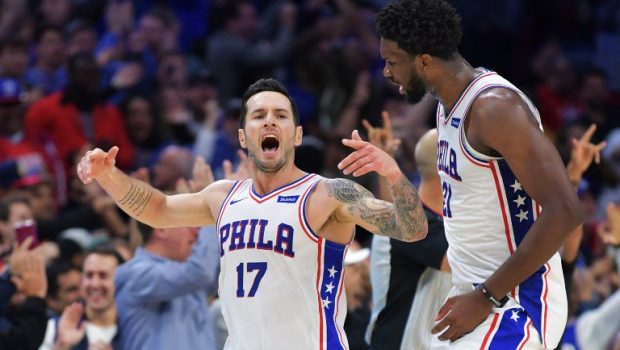 HERE’S WHY SIXERS RE-SIGNING JJ REDICK IS A MUST-DO!

As Sixers Nation concentrates on signing free agents Jimmy Butler and Tobias Harris, let’s not forget about J. J. Redick, their best shooter for the past two seasons.

Here is a list of three ideal free-agency destinations for Redick:

If there is one type of player that thrives playing alongside LeBron James, it’s shooters.

While James’ style of play can actually be abrasive to other star players who need the ball in their hands, guys like Redick do tremendously well with LeBron. Just ask Kyle Korver, who spent some time with James in Cleveland.

Also, let’s be honest: the Lakers are a horrendous three-point shooting team and need some floor spacing more than anything else. Redick would provide that for them and would not only open up the floor for LeBron but for guys like Kyle Kuzma and Brandon Ingram, as well.

Los Angeles likely has its sights on bigger fish this summer, but Redick is a great fallback option in case a lot of the other big names sign elsewhere (which is a distinct possibility).

The Jazz are in desperate need of some perimeter shooting, and they have the cap space to make some moves this summer.

Why not go after Redick?

He will likely be willing to accept a one-year deal and surely won’t break the bank, and he would be a blessing to Donovan Mitchell, who has been stifled the past two postseasons because the Jazz simply do not have enough options offensively.

While Redick is a poor defensive player who can be hunted on mismatches, Utah is a good enough defensive ballclub to mask his deficiencies on that end of the floor and will end up reaping all of the benefits of his offense.

Honestly, it’s hard to find a team that needs Redick more than his incumbent squad.

Joel Embiid and Ben Simmons are not exactly mature players, so having Redick around to keep them in line is key. If you had been watching Philly in the playoffs at all, you likely noticed Redick pulling Embiid and Simmons aside to coach them at various junctures of different games, which speaks volumes to how much those guys respect Redick.

And, of course, a team that has Simmons in its starting lineup absolutely needs some shooters on the floor, especially in the case of the Sixers, as Embiid would likely see constant double teams in the post without shooters around him.

The Sixers still need shooting even if they keep Redick, so losing him would be disastrous.