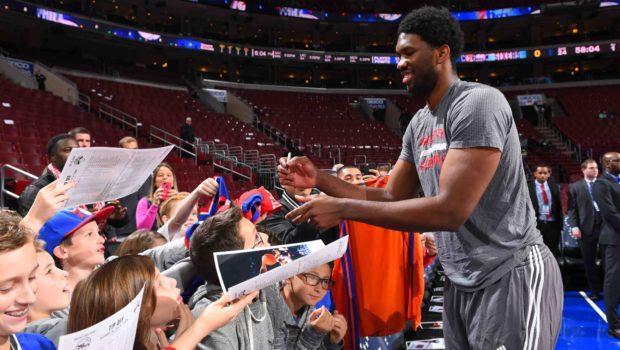 You know Sixers’ 2014 No. 3 overall draft pick Joel Embiid is chomping at the bit to get on the floor this fall.

So are all the team’s young fans!

After missing the 2014-15 and 2015-16 campaigns following foot surgeries, Embiid is primed for his first NBA action.

Speaking to 97.5 The Fanatic last week, coach Brett Brown said the 2014 draft’s No. 3 overall pick is slated to make his debut when the Sixers suit up in a few months.

“Embiid is well and truly on track; there are no red flags anywhere,” Brown said. “None of us should be afraid right now. We’re very proud of him.”

“I just left my third consecutive day working out with Joel,” Brown said. “He just is so on track—he’s on track in his head, he’s on track physically. I will tell you that, behind closed doors—physically, mentally, recent scans medically—everything is pointing in the right direction.”

Brown also said that Embiid is on track to play in the preseason. For the record, the Sixers are slated to open their exhibition slate Oct. 4 against the Boston Celtics.

Beyond Embiid’s development, Brown also gushed about 2014 No. 12 overall draftee Dario Saric—who recently starred for Croatia in the Olympics.

Not only did Saric punctuate a win over Spain with a clutch block of Pau Gasol at the buzzer, but he flashed balanced play on both ends of the floor throughout the tournament.

Saric averaged 11.8 points, 6.7 rebounds and 3.2 assists per game while serving as one of his side’s primary on-ball playmakers.

“I’m really, really, really excited to watch Dario play alongside the team we have in place,” Brown said, per 97.5’s Twitter account.

Considering Brown was forced to work with a rotating cast of characters that included scores of NBA Development League-caliber talent throughout his first three seasons at the helm, the arrivals of Embiid, Saric and No. 1 overall pick Ben Simmons figure to make his life a lot easier.

“It’s a reset button,” Brown said. “This year’s roster is completely different than the last three years’, and I too share the excitement the city feels.”

And while Brown will need to manage minutes with a crowded frontcourt that includes Embiid, Saric, Simmons, Nerlens Noel and Jahlil Okafor, he finally has a bevy of talent to deploy as he seeks to turn the Sixers into one of the Eastern Conference’s upstart clubs.