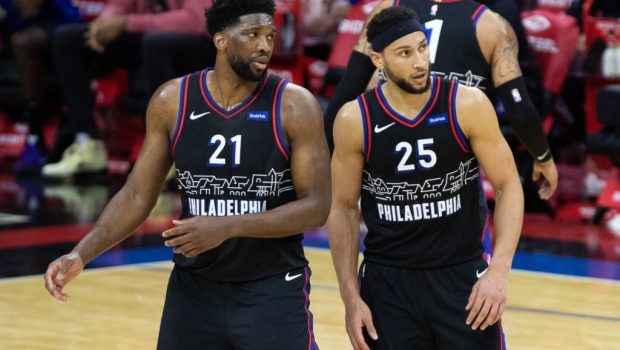 HERE’S WHY SIXERS ARE REAL-DEAL CONTENDERS FOR NBA TITLE!

After a combined 47 wins from 2013-2014 through 2015-2016, the 76ers have made steady progress with the likes of Joel Embiid and Ben Simmons making their way from rookies to NBA All-Stars. Losing twice in the Eastern Conference semifinals in 2017-2018 and 2018-2019, the team appeared to be ready to make the next step last season. However, a disappointing 43-30 regular season and first round playoff loss spelled the end of the Brett Brown era.

Enter new head coach Doc Rivers and president of basketball operations Daryl Morey and the 76ers are among the top favorites for the NBA Title.  The team has added 15-year veteran Dwight Howard to back up Embiid.  Howard has been excellent in his role, averaging 7 points and 8 rebounds in 17 minutes per game. The additions of Danny Green and Seth Curry have provided much needed 3pt shooting, with the two hitting 41 percent for the season. Back to his Los Angeles Clippers form is Tobias Harris, averaging 20 points per game.

There’s no question the key to the 76ers success falls in the lap of Joel Embiid, who is a leading candidate for league MVP. He’s averaging 30 points and 11 rebounds per game, hitting 51 percent from the floor, 85 percent from the free throw line and 38 percent from beyond the arc.  What may be even more impressive is what the 76ers have done without Embiid in the lineup.  During a three-week stretch with Embiid out due to a knee injury, the 76ers went to work and went 7-3, winning games, including 4-2 on the road.

Last year the 76ers would have crumbled in Embiid’s absence, particularly on the road. This season, the 76ers have the top record in the Eastern Conference at 39-17 and at home with a 22-5 mark.  The biggest improvement over last season is their performance on the road, posting an impressive 17-12 record.

Not only can the 76ers beat opponents through their big man, who is also dominant defensively, they have an overall stellar defense with potential defensive player of the year Ben Simmons. He is averaging 1.6 steals and 0.6 blocks per game and consistently makes life miserable for opposing top scorers.  Coming in off the bench is Matisse Thybulle, who is the only guard in the top 30 in blocked shots.  More impressive is he is averaging 1.5 steals and a blocked shot in only 19 minutes per game.

The overall bench is also stronger with the improvement of Shake Milton and Furkan Korkmaz. Milton provides instant offense, fourth on the team in scoring at 13.6 points per game. After a slow start, Korkmaz has come on, particularly of late and is hitting 38 percent from beyond the arc.

At the trade deadline, the 76ers added veteran George Hill. Although still recovering from injury that has limited him to 14 games, Hill should be back before the playoffs and will add veteran depth, three-point shooting and solid defense.

For the first time since the 2000-2001 76ers led by Allen Iverson, the 76ers have a legitimate shot at reaching the NBA Finals. Roadblocks are in the way, but the 76ers have shown they can overcome adversity. Is this the year to celebrate an NBA title for the first time since Dr J. and Moses Malone brought it to Philadelphia in 1982-1983? NBA point spread seems to favor them. Time will tell.