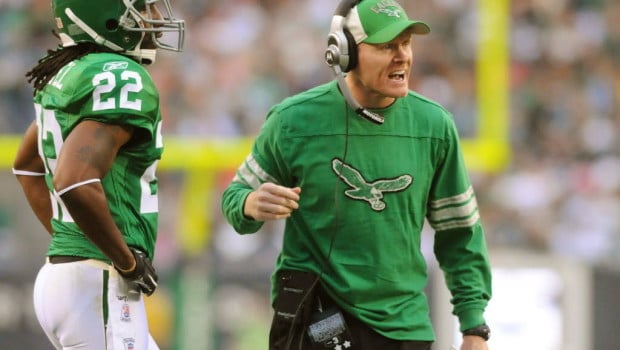 Chip Kelly’s body isn’t even cold yet after his stunning firing as Eagles Supreme Leader and already we are thinking about his replacement.

1. Sean McDermott
McDermott spent 12 years with the Eagles but got a raw deal in his stint as defensive coordinator. He learned under Jim Johnson but wasn’t able to immediately duplicate his predecessor’s success and was fired. He immediately landed in Carolina under Ron Rivera, another member of the Andy Reid coaching tree.

Now, in his fifth season as Carolina’s defensive coordinator, McDermott has turned the Panthers’ defense into championship unit. It’s been some time since the Eagles had one of those.

This one probably won’t be very popular among fans, but Shurmur is an established NFL coach and Jeff Lurie obviously liked him enough to bring him back as the Eagles’ offensive coordinator for the second time. Shurmur was the Cleveland Browns’ head coach for two seasons — 2011, 2012— and amassed a 9-23 record.

The biggest thing Shurmur might have going for him is his connection to Sam Bradford. It’s unclear what Lurie thinks of Bradford, but if he really believes Bradford can be his franchise QB, Shurmur gives him the best shot of keeping him here.

3. Adam Gase
There’s a chance Gase will be viewed by many as the top coaching candidate in 2016. The 37-year-old is currently the Bears’ offensive coordinator and has helped Jay Cutler rediscover his form. Even if it’s not with the Eagles, it seems very likely Gase will have a head coaching job in 2016.

4. Josh McDaniels
We all know what Lurie thinks of the New England Patriots, his hometown team. The Patriots represent a lot in terms of being a model franchise to Lurie and other owners around the league.

Sure, McDaniels’ last head coaching stint didn’t go well — he was fired after two years in Denver with an 11-17 record — but he returned to New England as an offensive coordinator and again finds himself as a top candidate.

5. Sean Payton
This one won’t be entirely up to the Eagles. Payton is still under contract with the Saints, and Drew Brees recently said he and Payton aren’t going anywhere.

But things can change. If Payton does get fired by the Saints, the Eagles probably would be interested. And with Brees’ enormous cap hit next year, maybe he’ll be gone too. Maybe they could both end up in Philly.