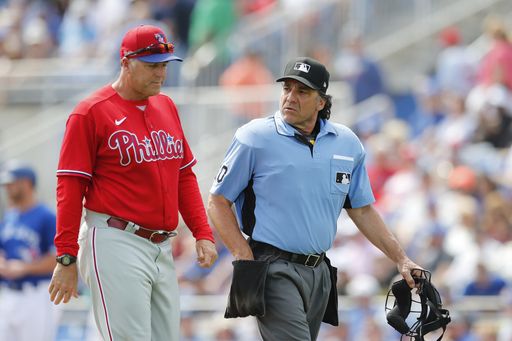 HERE’S WHY PHILS PITCHERS HAVE CONFIDENCE IN COACH BRYAN PRICE!

The Phillies hired Bryan Price as their new pitching coach, and he could end up being their most valuable addition.

”He’s all about pitchers being confident in what they’re doing and having the ability to pitch and not just throw,” All-Star catcher J.T. Realmuto said. ”That’s where finding their strengths comes in. If a guy is pitching to his strengths, he’s going to be able to maneuver the baseball and have confidence in what he’s doing. If you are asking someone to pitch to a scouting report and not something he’s confident in doing, it’s not going to work out very well. That’s something Price has honed in on is pitching to your strengths.”

But the Phillies gave Zack Wheeler a $118 million, five-year deal in free agency to bolster the rotation. Then they brought in several veteran relievers to compete for spots in the bullpen.

They’re counting on Price being a difference-maker. The veteran coach was hired to first-year manager Joe Girardi’s staff in October. Price had success as pitching coach for the Mariners, Diamondbacks and Reds. He also managed Cincinnati between 2014-18.

”He’s been awesome,” ace Aaron Nola said. ”He’s so experienced, he’s been around a lot of great pitchers, he’s been a manager so he knows how to handle a lot of things. He keeps everything simple.”

”With the new swing paths, (high fastballs) work for some guys,” Price said. ”However, you can’t give up all the tools in your tool box to be a high fastball pitcher if that’s not a strength.”

Price points to Zach Eflin, who has been more successful throwing sinkers. It doesn’t mean Eflin or other pitchers shouldn’t throw elevated fastballs but Price prefers mixing those pitches up instead of relying on them.

”Coaching quite often is about asking questions and leading players to their own answers,” Price said. ”It’s much different if you come in and tell someone how to be better. If you can lead them to their own answers, and they can take some ownership in the process, they can see the light through their own eyes. Creating a dialogue and having a relationship by give and take, back and forth is way better than being dictatorial.”

Nola struggled last year after finishing third in NL Cy Young Award voting in 2018. Wheeler has had strong half-seasons and needs to put things together over the course of a full season.

Veteran Jake Arrieta is healthy after two down years. Eflin has potential to be more consistent. Nick Pivetta, Vince Velasquez and Ranger Suarez are competing for the fifth starter spot.

”It hasn’t been a strength but I think the best is yet to come,” Price said.

The bullpen is still wide open after closer Hector Neris and lefties Adam Morgan and Jose Alvarez. Lefty Francisco Liriano appears a likely candidate to fill one of the eight spots. Two of the three guys competing for the No. 5 job are probably going to end up pitching in relief. Hard-throwing righty Seranthony Dominguez had a setback in his return from an elbow injury so his status is uncertain. Veteran Tommy Hunter may not be ready to start the season.

”Bryan is very seasoned,” Pivetta said. ”He has a lot of good information and a lot of knowledge to really help this staff take the next step forward.”