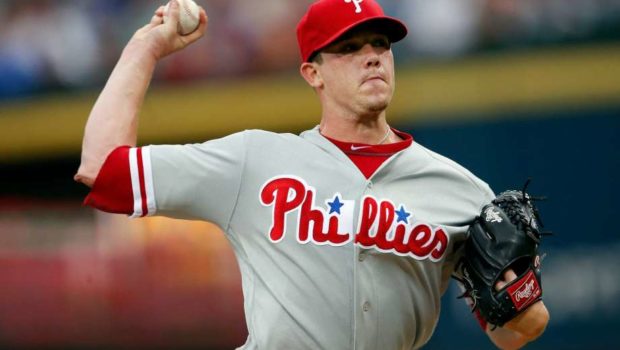 Just when you thought the Phillies were going to pull the trigger on a blockbuster trade — or any trade — general manager Matt Klentak stood pat.

Yesterday’s 4 p.m. trade deadline came and went, and Jeremy Hellickson (above) was still a Phillie. So was Vince Velasquez, thank God!

The Phillies are 48-59 in the first full season of a massive rebuild.

“As I said last week we were pretty focused on appropriately balancing the present and future,” said Klentak. “If a trade made sense we would have done it. The last several days and weeks we had a lot of dialogue about a number of players on our club. We never felt the appropriate balance was struck.

“We had offers out to other teams where if they said yes we would have done them and offers made to us that if we said yes would have been done, but there was nothing we felt made sense as an organization at this time.”

Starting pitcher Hellickson, a free agent at the end of the season who had done his best work in July, was a valuable commodity. But Klentak reportedly was looking for a top-five prospect from another organization and no team was willing to meet the price.

The Tigers and Marlins were among several teams kicking the tires on Hellickson in the last days and hours leading up to the deadline.

The Rangers showed some interest in right-hander Vincent Velasquez, but the Phillies weren’t eager to move the promising right-hander and there were several stumbling blocks to a deal.

Trade chips Andres Blanco and Peter Bourjos went down with injuries just before the deadline, limiting Klentak’s options. Blanco is likely done for the year, but Bourjos could return and be traded in August.

Yesterday’s deadline was for teams to make a deal without passing a player through waivers. Hellickson would almost surely be claimed, limiting the Phillies to trading him to whatever team put in the claim.

Other players like Ryan Howard and Carlos Ruiz would likely pass through waivers and could be easily dealt.

“It’s not impossible to make (a trade) in August, there’s just more hurdles to do so,” said Klentak. “At this juncture, I have a pretty good feel for the players who might get claimed, so we’ll see.”

If Hellickson isn’t traded, the Phillies will likely give him a one-year qualifying offer of around $16 million for next season. He would probably decline in favor of pursuing a long-term deal.

“We’ve got several months to make that decision and it wouldn’t make sense to commit to that this soon,” said Klentak of making Hellickson a qualifying offer.

While Hellickson could be an option for a multi-year contract with the Phillies, the team has five young starters that project into next year’s rotation in Velasquez, Aaron Nola, Jerad Eickhoff, Zach Eflin and Jake Thompson.