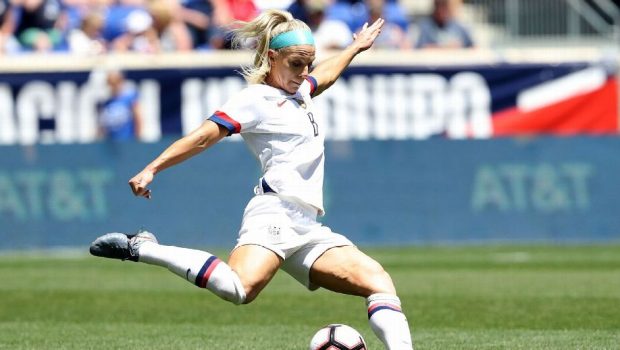 HERE’S WHY JULIE ERTZ AND USA ARE FAVES TO WIN WORLD CUP!

Any number of superficial strands connect Julie Ertz, Lindsey Horan, Rose Lavelle and Sam Mewis, the four midfielders who top the United States depth chart and who competed for three starting positions throughout the buildup to this World Cup.

But as the middle without which the entire U.S. effort on the field will crumble, the personal bonds that knit together their individual promise are anything but superficial. None of them know what it’s like to play in the midfield in a World Cup, but all of them know they aren’t alone.

“I call them soul ties,” Ertz said. “Because I think when you have history with somebody your bond just is stronger.”

The likely starters at forward — Tobin Heath, Alex Morgan and Megan Rapinoe — have played 34 World Cup games. The defense, including goalkeeper Alyssa Naeher, has its share of inexperience, but Becky Sauerbrunn is hardly a newcomer in the middle of the back line

Among the four midfielders who received most of the minutes in recent years, on the other hand, only Ertz has World Cup experience — and that as a center back in 2015. Horan played in the midfield in the 2016 Olympics, but started only once in four appearances in Brazil. Lavelle and Mewis have yet to play a minute at any position in any major tournament: