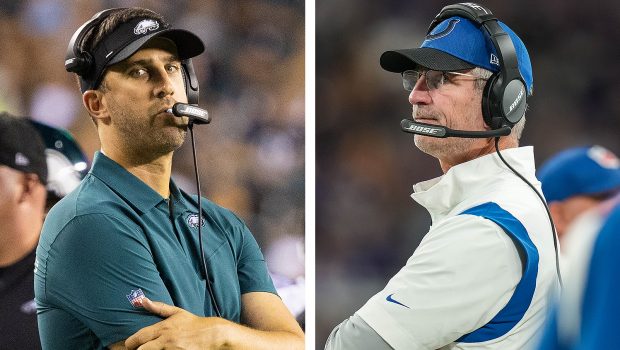 HERE’S WHY FRANK REICH IS COMING BACK TO THE EAGLES — NOW!

Frank Reich was fired as head coach by the Colts last Monday.

And since then the ex-Eagles offensive coordinator has been rumored to be on his way back to Philly to help replicate the Super Bowl path that culminated in that magical night in February 2018 when the Birds beat the Pats.

The Inky’s Marcus Hayes plots the progress of what seems like a self-fulfilling prophecy:

“I’d like to see Frank come back here and mess around for us,” right tackle Lane Johnson, the Eagles’ best player, said Friday.

Sirianni is Reich’s protégé, having worked under him with the Chargers and the Colts.

Combine those endorsements with this. Three years ago, Jeffrey Lurie told me:

“Frank Reich might be the best man I’ve been around in the NFL.”

Late Friday, a league source said the Eagles are discussing reaching out to Reich by the middle of next week.

So it sounds, at the very least, like the good reverend could act as a long-distance sounding board; a Zoom-call guru. Super. The Eagles should take whatever he’ll give them.

He would be invaluable not only because of his acumen, but because four common opponents remain for the Eagles. In fact, the Birds should be bugging Reich right now.

They faced a very different Commanders team in Game 3, when they sacked Carson Wentz nine times, but Taylor Heinicke is the quarterback now.