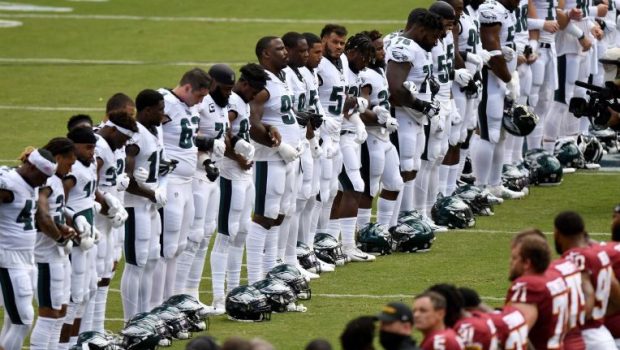 HERE’S WHY EAGLES HID IN LOCKER ROOM DURING THE ANTHEM!

The Eagles game yesterday in Maryland against the WFT was so bad it can only be described as:

But if you were watching the run-up to the actual game, you noticed that the Eagles stayed in their locker room while the Washington Football Team stood on the sideline during the national anthem.

Afterward, the Eagles headed to the locker room while Washington players and coaches walked to their sideline and knelt as a team for a minute or so of silence. Then Washington went into its locker room.

On Friday, Eagles safety Jalen Mills said the Eagles’ social justice committee had met as a team and decided their plan of action, but decided to keep it “in-house” until game time.

But Mills had watched the Thursday night game, when players and coaches from the Houston Texans and Kansas City Chiefs held their pregame show of unity, only to be booed by some of the estimated 17,000 fans in attendance.

“It’s no sign of disrespect to anybody,” Mills said about the pregame tribute. “It’s about unity, and that’s the message. Whether it’s our message … or any other team in this league – if they do decide to do something for this first week or the whole season – we gotta let people know that it’s no form of disrespect.

“The only thing that we’re trying to show is unity, and that’s the only message.”

One thought on “HERE’S WHY EAGLES HID IN LOCKER ROOM DURING THE ANTHEM!”