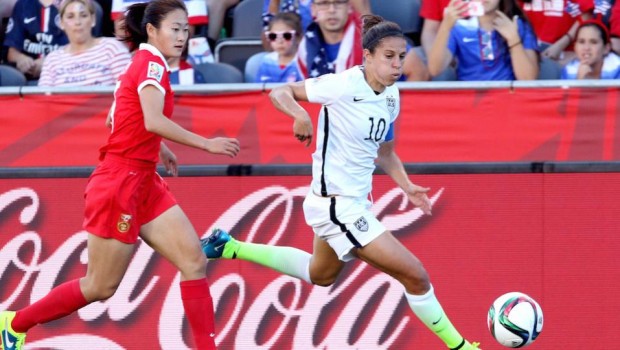 WHY CARLI LLOYD IS PISSED OFF ABOUT WOMEN’S SOCCER SALARIES!

I’ve worn a U.S. Soccer uniform for 12 years and have done so proudly. I’ve had some of the greatest moments of my life — winning two Olympic gold medals and the 2015 Women’s World Cup — wearing that uniform. So when I joined four teammates in filing a wage-discrimination complaint against U.S. Soccer late last month, it had nothing to do with how much I love to play for my country.

It had everything to do with what’s right and what’s fair, and with upholding a fundamental American concept: equal pay for equal play.

Even if you are female.

Simply put, we’re sick of being treated like second-class citizens. It wears on you after a while. And we are done with it.

The United States women’s national team is the most successful team in the history of U.S. Soccer. We’ve won three World Cups and will try to win our fifth Olympic gold medal this summer in Brazil. When we captured the Women’s World Cup title in Canada in July, we drew the highest American television rating for soccer in history and, according to a financial report published by U.S. Soccer last month, helped generate $17.7 million in profit for the federation.

Yet even though U.S. Soccer’s financials confirm that we are the driving force that generates a majority of the revenue for the federation, when we as a team presented our proposal for increased compensation in our new collective bargaining agreement, U.S. Soccer told us, on more than one occasion, that our proposal was not rational. Essentially, the federation said that it had a certain sum of money set aside for the women’s team and that our proposal was unacceptable.

We’ve gotten nowhere negotiating with our federation for years, and it became clear to us that nothing had changed. That’s why we went to the Equal Employment Opportunity Commission with our complaint.

I won’t bury you with numbers, but there are a few important basic facts worth noting. Each year, the United States men’s and women’s national teams each play a minimum of 20 friendly matches. The top five players on the men’s team make an average of $406,000 each year from these games. The top five women are guaranteed only $72,000 each year.

Yes, U.S. Soccer has stepped up to support the National Women’s Soccer League — it also subsidizes our salaries for the NWSL, at roughly $54,000 per player — and yes, we can get some modest bonuses by playing for the national team. But still, the inequality is jarring.

I understand that the men’s World Cup generates vastly more money globally than the women’s event, but the simple truth is that U.S. Soccer projects that our team will generate a profit of $5.2 million in 2017 while the men are forecast to lose almost $1 million. Yet we get shortchanged coming and going.

I was on the road for about 260 days last year. When I am traveling internationally, I get $60 a day for expenses. Michael Bradley gets $75. Maybe they figure that women are smaller and thus eat less.

When Hope Solo or Alex Morgan, say, makes a sponsor appearance for U.S. Soccer, she gets $3,000. When Geoff Cameron or Jermaine Jones makes the same sort of appearance, he gets $3,750.

Our beef is not with the men’s national team; we love those guys, and we support those guys. It’s with the federation, and its history of treating us as if we should be happy that we are professional players and not working in the kitchen or scrubbing the locker room.

The fact that women are being mistreated financially is, sadly, not a breaking news story. It goes on in every field. We can’t right all the world’s wrongs, but we’re totally determined to right the unfairness in our field, not just for ourselves but for the young players coming up behind us and for our soccer sisters around the world.

The Matildas — Australia’s women’s national team, which is currently ranked fifth in the world — have battled their federation for years and went on strike last year over the federation’s refusal to pay the players more than $21,000 a year. The women on the Colombian national team recently went four months without being paid at all.

When I first made the national team, there were no salaries and no health benefits, so yes, we’ve made some progress. But we’re nowhere near where we should be.

I don’t think anyone would say that the women on the United States national team are not great role models and ambassadors. Everywhere we go, we connect with fans, sign autographs and represent our sport and federation with class. We will continue to do that, provided that U.S. Soccer treats us in the same manner.

Two years ago, before the Algarve Cup, an important annual tournament in Portugal, we considered going on strike over these issues, but we weren’t completely united then and wound up backing down.

If I’ve learned anything in my career, it’s that nothing worthwhile in life comes easy. That’s just the way it is. This isn’t about a money grab. It’s about doing the right thing, the fair thing. It’s about treating people the way they deserve to be treated, no matter their gender.

South Jersey’s Carli Lloyd is a co-captain of the United States women’s national team and the author of a forthcoming memoir, “When Nobody Was Watching.”