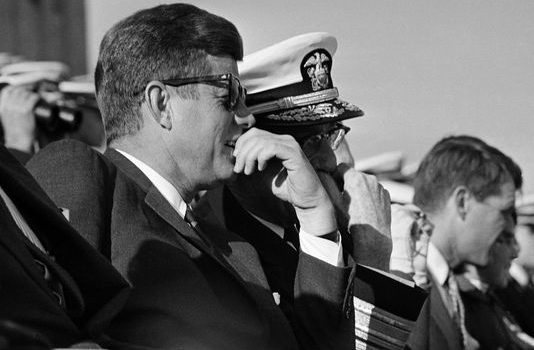 HERE’S WHY ARMY-NAVY IS SUCH A BIG DEAL TO PHILLY!

Army and Navy tee it up today at the Linc for their 120th game, and here’s why it matters to Philly and the country, just as President John F. Kennedy knew when he came to town for the game in 1961 and 1962 above).

Army has won the last three games in the series. Although the Black Knights (5-7) are having an off-year compared with Navy (9-2), a victory for the Midshipmen is certainly not guaranteed. They never are in this rivalry. Army finished 2-10 in 2012.

The football programs at Army and Navy are not as powerful as they were in the past, but that actually enhances the game’s significance because most seniors are done with football after this game and will move into their service commitments — and often into harm’s way.

It adds deep luster to the game that simply can’t be replicated: The players on the field, and the impeccable Corps of Cadets and Brigade of Midshipmen in the stands have died serving their country, together, in battles far more consequential than a football game.

They let it all out this game. The NFL does not await most of them. The rivalry deserves their best efforts. The game is quintessential American, in all the best ways.

Army and Navy also each play Air Force in football, and the winner of the series receives the Commander-in-Chief Trophy. But the Army-Navy Game has been around since 1890 (with a few breaks here and there), and it always attracts a sellout crowd.

Then they will line up and go right at each other, because anything less than a full effort would be disrespectful — not just to their teammates, but to the opponents.

When Army finally beat Navy in Baltimore in December 2016 before a capacity crowd and then-President-Elect Donald Trump, Black Knights wide receiver Edgar Poe said: “I can’t put words to it. It doesn’t even feel like it’s for real.”