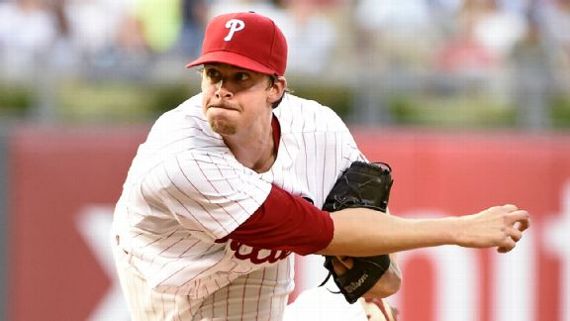 HERE’S WHY AARON NOLA IS THE ACE OF THE PHILLIES’ STAFF!

“Nola’s hallmark is his stellar command, which stems from good athletic ability and freakish flexibility. His fastball checks in at 93-95 mph and gets excellent life from a mid-three-quarters arm slot. He backs up the fastball with a slider and change-up, which each have the potential to be plus in the future.”

Aaron Nola was the seventh overall pick in the 2014 draft out of LSU, so it’s not as if he has come out of nowhere.

But he was described as a guy with a higher floor than ceiling — a good bet to make the majors but more likely to settle in as No. 3 starter than an ace.

It always seemed a little odd that the Phillies would take a pitcher without major upside that high in the draft. Well, maybe the Phillies knew something because Nola is currently pitching like an ace: 3.13 ERA, 46 IP, 31 H, 8 BB, 49 SO, 3 HR. His knockout pitch is a curveball that might be the best in the game right now.

What’s interesting is that his pitch was always described as a slider, not a curve. Whatever it is, it has been almost impossible to hit: Batters are hitting just .074 against it (they hit .191 last year). Note as well from that piece I linked to that Nola has moved from the middle of the rubber to the first-base side.

Nola’s average fastball velocity is actually just 90.0 mph, so less than than the ranges described as an amateur. But note what ESPN’s Keith Law wrote last year: “Nola has grade-70 command of his 91-94 mph fastball, with very good life on the pitch, locating it where he wants to either side of the plate and showing little fear when working with it.” It’s the big velocity that gets pitcher a high ranking on the prospect lists, but if you have grade-70 command and movement, that’s a road to success as well.