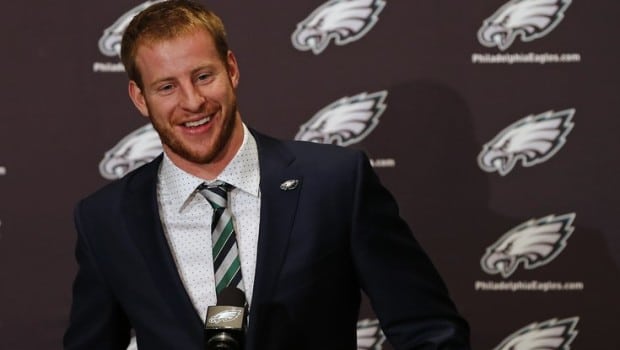 Here’s why most NFL prognosticators think the Eagles are looking at pain and heartache in 2016:

It was an offseason of addition by subtraction.

There was the firing of controversial head coach Chip Kelly (actually released with one game remaining in 2015). Then there were the trades that sent some of his handpicked talent (Byron Maxwell, DeMarco Murray and Kiko Alonso) elsewhere for draft choices. The Eagles also gave up their share of draft picks to move up to No. 2 in this year’s selection process in Chicago.

And there still seems to be an air of uncertainty surrounding this team, especially when it comes to the quarterback position. The Birds took North Dakota State’s Carson Wentz (above) with their first-round choice, apparently much to the chagrin of 2015 14-game starter Sam Bradford.

Bradford inked a lucrative two-year deal with this offseason, but it’s safe to say that wasn’t much of a long-term commitment by the organization. Don’t forget that new head coach Doug Pederson brought quarterback Chase Daniel over from Kansas City.

You could argue (and win) that the team’s best offseason move was the hiring of defensive coordinator Jim Schwartz. But do the Eagles have the right personnel to do what the coach wants to do on this side of the football? Schwartz’s last stop was Orchard Park, and former Buffalo Bills such as linebacker Nigel Bradham and cornerbacks Leodis McKelvin and Ron Brooks followed him to South Philly.

That helps in terms of learning the system, but does the club have the right bodies to get the job done? Keep in mind that the Eagles ranked 30th in total defense and gave up the most rushing yards in the league in 2015.

With an unsettling situation at quarterback and a new approach on the other side of the football, these less-than-peaceful Eagles give one an uneasy feeling these days.