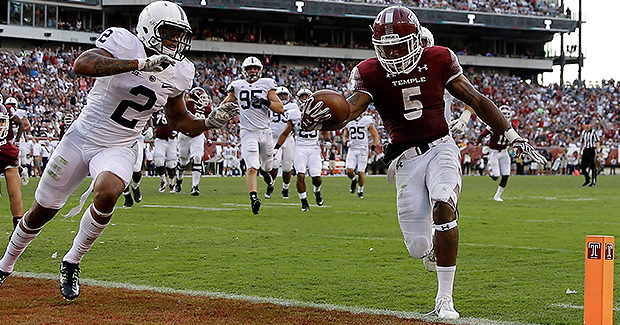 Penn State-Temple is set for Saturday and Beaver stadium. Here’s a quick look at the state of the Owls’ program after two games:

1. How good is the Temple run defense? The Owls don’t have standout linebacker Tyler Matakevich this season and Temple paid a steep price in its season-opening 28-13 loss to Army. Matt Ruhle’s team gave up 329 rushing yards.

2. The pass game hasn’t clicked yet. Maybe it won’t at all this season. Veteran QB Phillip Walker, who had his moments in the Owls’ 27-10 win over PSU last season. But in Temple’s first two games against pedestrian secondaries — Army and Stony Brook — Walker, who went by P.J. last season, completed only 46.9 percent of his passes and threw four interceptions.

3. Can the Owls’ get to 4? Penn State turned the ball over four times in a 42-39 loss to Pitt (three fumbles, one interception). And Temple made life easy on itself in the win over Stony Brook, picking off three interceptions and forcing a fumble. A four-turnover day by the Lions’ offense Saturday could pave the way for a visitors’ upset.