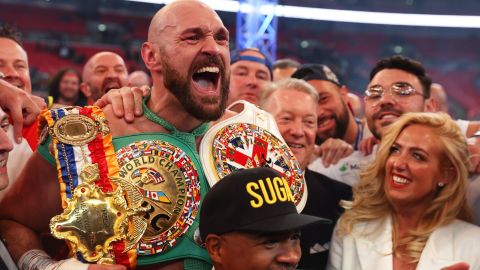 Tyson Fury’s right uppercut ended his title defense against Dillian Whyte in a U.K. homecoming before 94,000-plus at Wembley Stadium, which, Fury says, is the final fight of his Hall of Fame career.

Fury, known as “The Gypsy King,” set up the fight-ending shot with a jab, one of 143 he threw in the fight. The uppercut immediately crumbled Whyte to the canvas. Whyte, 34, was fighting for the heavyweight title for the first time after he waited more than 1,600 days as WBC’s No. 1 contender, and he seemingly used every ounce of strength left to beat the referee’s count.

But when Whyte (28-3, 19 KOs) was asked to walk forward to prove his readiness, he tumbled into the ropes and the referee quickly halted the contest with one second remaining in Round 6, possibly signaling the end of Fury’s career at 33 years old.

“I’ve done everything asked of me,” Fury, ESPN’s No. 5 pound-for-pound boxer, said at the postfight news conference. “I’ve done more promotion, more interviews than anybody, and I go above and beyond with all these shows I fight on, so I definitely deserve to be able to make a choice where I think it benefits me most.

“I’ve given 20 years to boxing, amateur and professional. I’ve had me brains knocked out. I’ve been put down, I’ve been rocked, I’ve been cut. I’ve had tough fights, I’ve had draws, I’ve had wins. I’ve boxed all over the world. How much blood can you get out of a stone?”