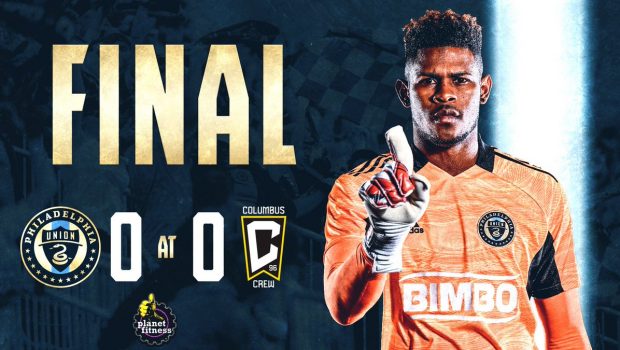 HERE’S THE POINT: UNION HAVE 30 EVEN THOUGH THEY CAN’T SCORE!

Andre Blake stopped a penalty kick among his five saves and tied the Columbus Crew 0-0.

The Crew ran their unbeaten streak to five (2-0-3) as Eloy Room made two saves for his fifth shutout.

Not only did Blake make a first-half save on the penalty, the Crew had a goal by Lucas Zelarayan in the 66th minute overturned after video review because Erik Hurtado was offside prior to the goal.

Blake, the MLS Goalkeeper of the Year in 2016 and 2020, made the penalty stop save on Pedro Santos in the 19th minute after Sean Zawadzki was fouled by Daniel Gazdag during a corner kick.

Santos, taking the Crew’s first penalty of the season, drove the ball to the lower left corner but Blake was there with his right hand for his first stop in the four attempts against him in 2022.

The missed opportunity epitomized the Crew’s frustration in the first half. Columbus had seven of the eight shots and three of the four on goal.

The match marked the first anniversary of the opening of Lower.com Field, where the Crew are now 11-7-4 dating back to early July of last year.