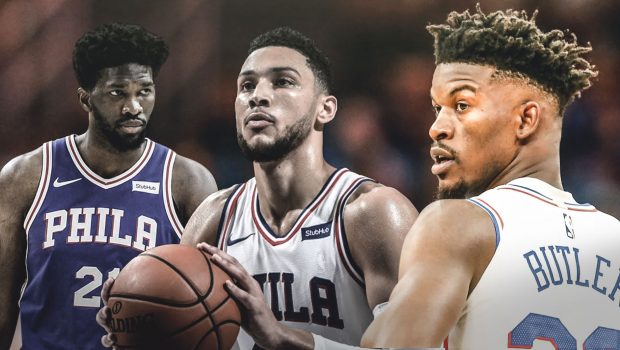 HERE’S THE POINT: CAN SIXERS WIN WITH BENNY RUNNING THE SHOW?

So, the Sixers season has ended with a gut-wrenching buzzer-beating 7th-game loss in the Eastern semis.

Better than last season’s five-game wipeout by the Celtics in the same round.

Can the Sixers win with Ben Simmons at point guard?

In a chat with ESPN.com in January, coach Brett Brown likened himself to a waiter — “like I’m serving each of them food,” he said. “Joel needs a touch. Ben needs to be posted. Jimmy needs a play.” Brown did not enjoy that sensation. “You hope the offense dictates who gets shots,” he said, “but it has been challenging.”

When it looked jagged and awkward, Brown would remind himself that Philly had time. “So much of my thinking is always about what’s realistic in May,” he told ESPN in early January. “You can get tricked by what is successful in the regular season, especially against some of the lesser teams. The holy grail is what works in May.”

May arrived, and for the second straight season appeared to raise real questions about Simmons’ fit in high-level playoff basketball.

The presence of Butler and Harris, both free agents this summer, changed the contours of those questions and made them more pressing.

Brown and Sixers brass have described Simmons for much of the past two seasons as a point guard. Against Toronto, that has been true only in stretches. Butler has been Philly’s closest thing to a point guard, and its most reliable postseason player. The offense has belonged more to Butler and Joel Embiid, and at times Harris and JJ Redick, than to Simmons. It is perhaps the most consequential on-court development of the postseason so far.

In the regular season, Simmons finished 21.3 percent of Philly’s possessions with a shot, drawn foul, or turnover — a usage rate befitting a pass-first All-Star. That fell to 18 percent in the first round against the Brooklyn Nets, and further still to 14.5 percent against the Raptors.

Last season, Simmons ran about 27 pick-and-rolls per 100 possessions, according to Second Spectrum tracking data. That dropped to about 12 in this regular season and playoffs combined. He has increased his participation as a screen-setter, including on handoffs, but those jumps do not come close to matching the decline in classic on-ball actions.