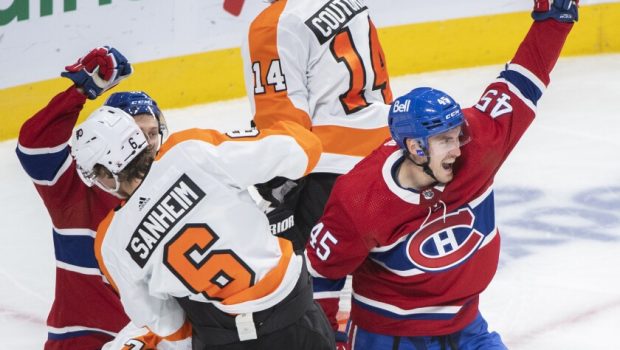 HERE’S THE POINT, AND FLYERS WILL TAKE IT IN AN EMPTY ARENA!

The Flyers salvaged a point last night, and virtually no one in the arena saw it!

Jonathan Drouin scored in the shootout, and the Montreal Canadiens beat the Flyers 3-2 in an empty Bell Centre because of the rise of COVID-19 cases.

Quebec public health officials asked the Canadiens to play without fans in their home arena earlier Thursday to help slow the spread of the virus. The Canadiens agreed to the provincial government’s request, making the game the first at Bell Centre without spectators since Game 4 of the 2021 North Division semifinal against the Toronto Maple Leafs on May 25.

“Today was a bit of a wake-up call,” Drouin said. “We weren’t expecting that there wouldn’t be fans in the stands this year with the vaccines.

“We were told the opposite, but it’s tough to see that again, without the fans’ energy. After that, health and safety is more important than going to watch a hockey game.”

There was no word yet on whether fans will be at the Bell Centre when the Canadiens face Boston on Saturday. The game would be the Bruins’ first visit to Montreal since Nov. 26, 2019. The Bruins had seven players on COVID-19 protocol before their 3-0 loss to the New York Islanders on Thursday, including stars Patrice Bergeron and Brad Marchard.

Drouin said he was apprehensive about playing a team with that many players placed on protocol.

“I’m not really comfortable playing against people that might have COVID,” Drouin said. “When you have seven guys on the team (with COVID,) you can have two or three others that get it tomorrow, I don’t know.

“Anyway, I don’t feel comfortable to play with that. That’s not what we were told this year with the vaccines. Of course things change over time, but it’s not really ideal.”

Canadiens head coach Dominique Ducharme didn’t want to weigh in on a potential halt to playing because of COVID-19, but understood that some players would be worried by the situation. He said he has faith the NHL will protect the players.

“Not that I feel it (in the locker room) but at the same time it’s a reflection of our society regarding this situation,” Ducharme said. “Some people are more comfortable and some are more worried. A team is a little bit like a reflection of society.”

Jackson Cates said that the Flyers found out about the decision to play in an empty arena right before warmups.

“The reaction was that it’s just another game and we can’t let that bother us,” he said. “We’ve got to play the right way, stick to the structure and build our own energy.”

Artturi Lehkonen and Laurent Dauphin scored in regulation for Montreal, which snapped a seven-game losing streak.

“It felt good to break the streak. Of course it would have been better to be in front of fans but I’ll take it anyway,” Dauphin said.

Max Willman and Cates scored for the Flyers. Carter Hart stopped 38 of 40 shots.

Lehkonen deflected Brett Kulak’s shot from the point for his second goal of the season to open the scoring.

Philadelphia tied it 1-1 2:20 into the second period when Willman took advantage of Montreal forward Nick Suzuki falling in front of the net.

Cates drove the puck in the offensive zone and beat Primeau with a wrist shot for his first NHL goal to make it 2-1 in the final minute of the second.

Montreal tied the game at 2-all at 14:21 into the third period. Dauphin took advantage of a rebound and scored his first as a member of the Canadiens.