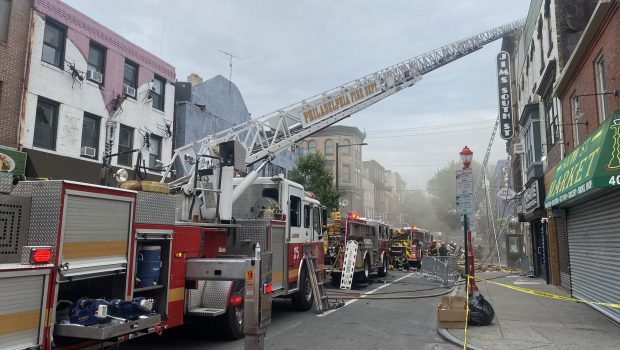 The great Jim’s Steaks at 4th and South was badly damaged and owner Ken Silver told the Inky the century-old building could be “a total loss.”

The fire was under control by shortly after 1:30 p.m. Friday, more than four hours after first responders arrived at the scene.

Philadelphia Fire Commissioner Adam Thiel said firefighters arrived around 9:15 a.m. because of reports of some downed wires. They were met with smoke, and more units were called throughout the morning to aid in the response.

Thiel said more than 125 firefighters, medics, and other support personnel, as well as 57 vehicles, were on the scene of the fire, made all the more difficult to manage because of high temperatures, making the blaze equivalent to a three-alarm fire. By 11:30 a.m., the department had additional fire companies at the scene to swap out the first responding units in need of rest after the long exposure to heat.

No injuries were reported. The cause of the fire remains under investigation. https://t.co/4h5tJtzJPV pic.twitter.com/gRH5e7IiiH