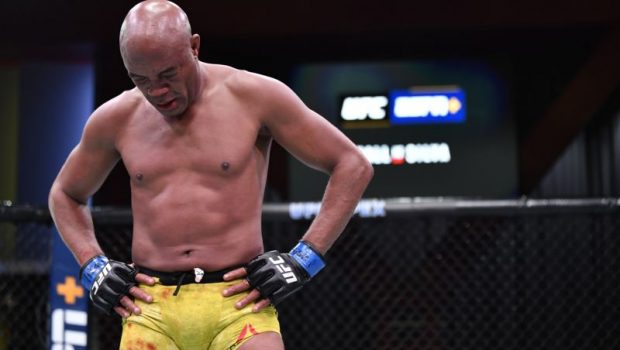 Uriah Hall was apologizing to Anderson Silva moments after he ended the 45-year-old’s UFC career.

“I’m sorry,” Hall said after stopping Silva with strikes at 1:24 of the fourth round last at Apex.

Silva came to the UFC in 2006 and reeled off 16 consecutive victories, many of them in spectacular fashion, and was acclaimed at the time as one of the greatest mixed martial artists who ever lived.

He was the UFC’s Mike Tyson, the guy who could end anyone’s night at any moment in any manner of ways. Even when he was outwrestled and beaten down for more than four rounds, as he was at UFC 117 in a 2010 title defense against Chael Sonnen, he found a way to win in the waning seconds. He saved his title by getting perhaps the most unlikely triangle choke submission in UFC history.

No elite athlete can remain elite forever, though, and it was clear that time has ravaged Silva. He’s won just one fight in the last seven years and his chin has regularly betrayed him.

He was getting the best of Hall for the better part of three rounds. He was chopping at Hall’s legs early, as Hall stalked him but was conservative with his strikes out of respect for Silva’s legendary counter-striking ability.

With the clock winding down in the third, Hall changed the course of the fight and, perhaps, his own career, since even at 45, a win over Anderson Silva still means something. Hall landed an overhand right that dropped Silva into a heap.

Hall landed two vicious shots as Silva was down. Referee Herb Dean had heard the 10-second clapper and showed restraint and allowed the fight to continue.

There would be no dramatic comeback or storybook finish on this night, though. Silva had to do his post-fight television interview while seated, and then went straight to the hospital to be examined.