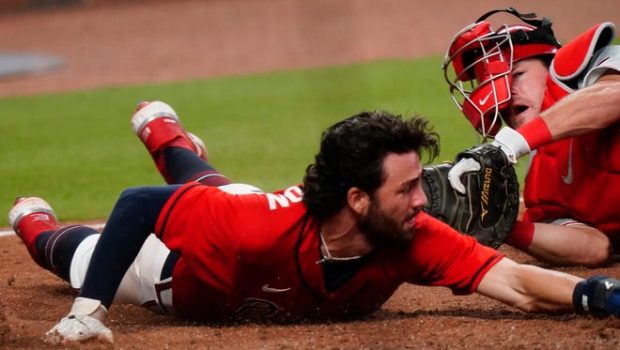 HERE’S THE AUGUST 23 PLAY THAT TURNED AROUND THE PHILS SEASON!

Phillies closer Brandon Workman survive the ninth in Atlanta when Dansby Swanson, the potential tying run, was tagged out at the plate by catcher Andrew Knapp to end the game.

The Braves challenged the call, but it was upheld.

“It’s a great relay, it’s a great play by Knapp, a short-hop,” Phillies manager Joe Girardi said. “We needed this win really badly. We had a tough week.”

Knapp took Gregorius’ relay throw and positioned himself perfectly in front of the plate.

“It’s one of these wins you can look at the end of the season and say, ‘Man, that turned our season around,’ ” Knapp said.

The play that turned around the Phillies season. pic.twitter.com/7MDW9QQmoR