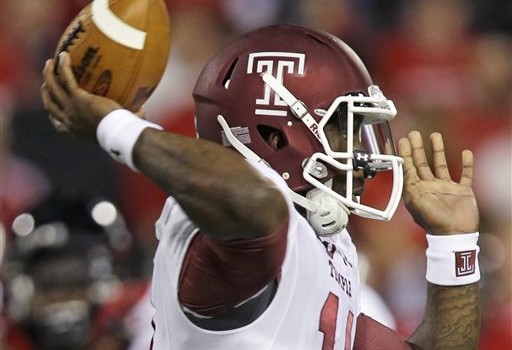 HERE’S WHY TEMPLE CAN WIN THE AAC CHAMPIONSHIP!

Quarterback P.J. Walker took a noticeable step back last year after a surprising debut in 2013, and coach Matt Rhule brought in ex–Atlanta Falcons QB coach Glenn Thomas to get Walker back on track.

A week from today, Temple hosts Penn State at the Linc at 3:30 pm in the kick-off of the local college season.

And while most seers expect the Owls to improve on their 6-6 2014 record, there is a possibility that the improvement may be a breakout.

As in, taking the AAC title!

Last year, one-third of the AAC title went to a historically hapless program, Memphis, which in its third season under coach Justin Fuente came out of nowhere to produce school records for wins (10) and final rank (25th, the Tigers’ first ranked finish).

This year, the same insurgent role could very well be filled by Temple, which quietly finds itself in prime position for a similar turnaround under third-year coach Matt Rhule.

A longtime Temple assistant under predecessors Al Golden and Steve Addazio, Rhule is the kind of boss who shows up to training camp sporting a survival beard and saying things like, “We do not put our hands on our hips. We do not bend over at Temple,” and he’s assembled a defense that plays exactly the way its coach talks.

In 2014, the Owls tied for fourth nationally in scoring defense, yielding just 17.5 points per game, and led all mid-majors in Defensive S&P+, where they ranked 16th. In 2015, they return 14 of their top 15 tacklers from that group, including All-AAC picks Tyler Matakevich at linebacker and Matt Ioannidis and Praise Martin-Oguike on the line, laying the foundation for a unit that could be as good as any in the nation.

Offensively, Temple failed to score more than one offensive touchdown in any of its last seven games, and there’s reason to believe it can get a lot better:

Quarterback P.J. Walker took a noticeable step back last year as a sophomore after a surprising debut in 2013, and Rhule brought in ex–Atlanta Falcons QB coach Glenn Thomas to get Walker back on track. If that happens, the difference between a repeat of last year’s 6-6 slog and the kind of nine- or 10-win miracle that might put Rhule in a bigger job could be as little as a few more productive possessions per game.