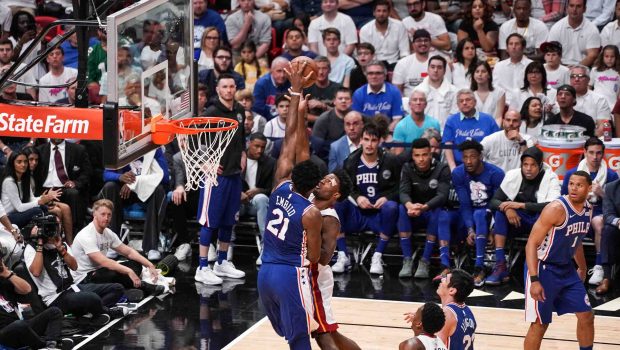 So says none other than the Boston Globe:

The Celtics were able to overcome one physically dominant, gifted and unique franchise player and now run into two of them in the Eastern Conference semifinals against the Sixers.

Those Celtics faithful who were in awe of 23-year-old Giannis Antetokounmpo’s prowess will now have the opportunity to witness the Philadelphia duo of Joel Embiid and Ben Simmons, two millennials who will take the reins of NBA stardom from LeBron James over the next decade and become transcendent talents.

Their only drawback right now is youth. The 24-year-old Embiid was drafted in 2014 but is in his first full season after the 7-foot center missed two years after foot surgery and part of last season with knee issues. When healthy, Embiid is the league’s most talented and imposing center with a vivacious personality to match.

The 6-foot-10-inch Simmons, who missed last season with foot surgery, is a 21-year-old rookie who has quickly turned into James-lite with his ability to handle the ball brilliantly for his size, distribute, and run the offense. He has Magic Johnson-type skills and has exceeded all expectations after sitting out a full year.

The Sixers, mired in a half-decade rebuilding plan, have spent the past few years putting a formidable team around Embiid and Simmons. They signed J.J. Redick and Amir Johnson. They drafted Dario Saric. They found shooter and defender Robert Covington. They acquired 3-point shooters Marco Belinelli and Ersan Ilyasova in February.

And they enter this series as the favorite because all of their talent and potential has come to fruition at playoff time. They disposed of the Miami Heat in five games, a series many prognosticators picked Miami to win because of its experience. Experience doesn’t appear to be an issue for the 76ers, and the Celtics will have to devise ways to defend the biggest point guard in the NBA (Simmons) and the most gifted center (Embiid):