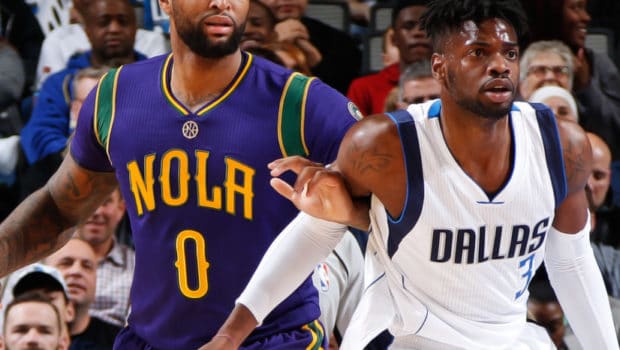 Remember Feb. 23, when the Sixers traded Nerlens Noel to the Dallas Mavericks and know-nothings like Michael Barkann declared that the Sixers’ rebuild had just been set back a couple of years.

They traded him because he is going to be a free agent this summer, and the Sixers correctly determined he wasn;t worth a long- term commitment for long green.

The Mavericks probably would love to sign him to a multi-year deal starting at $10 million, but no one should be surprised if he commands a starting salary of $13-to-$15 million.

If that sounds like a lot for a player who averaged 8.5 points and 7.5 rebounds in 22 games as a Maverick, well, consider Noel’s age and potential.

But what is his potential?

Is it any higher than the Sixers’ Richaun Holmes?

“I love Dallas,” said the 6-11, 220-pound center. “In my short time here, I’ve really enjoyed it. With the pieces that we have, and the opportunities we’ll be seeing in the near-future, I think there’s a lot to be excited for.”

It’s not surprising that Noel sees himself as part of the Mavericks’ future, but the organization no doubt likes hearing it.

As coach Rick Carlisle told the Dallas Morning News, Noel is “a guy that we’ve got to get signed.” After all, Carlisle noted, Dallas traded former first-round pick Justin Anderson, Andrew Bogut and two second-round picks for Noel.

Allowing him to walk to another team would be bad business. Dallas can retain Noel by signing him or extending him a qualifying offer before June 30 and matching any offer sheet he signs with another team.

“I’ve been impressed with him,” Carlisle said. “He’s a very likable guy. Guys in the locker room took to him. He’s an exciting young talent, and I do think he can expand his game.”

If the Mavericks’ decision-makers like hearing Noel’s positive comments about staying in Dallas, they will love this part: Noel said he hopes to add 15-20 pounds of muscle this offseason.

“This is probably the biggest offseason of my career,” he said.

“Being with a new team and being in a new environment, to really build on some things that I wasn’t really wasn’t capitalizing on in past years [in Philadelphia].”

Noel cited his individual workouts with Carlisle as reason for optimism that he can maximize his potential in Dallas. Carlisle has focused on helping Noel develop more consistent shooting mechanics on his 10-15 foot jumpers, and expanding his repertoire around the rim.

“As soon as things work out [contract-wise], I’ll be looking to spend a lot of time with Coach Carlisle,” Noel said. “The work that we have done this last month is something that, if we put a whole offseason in, I think we can make really big strides.”

The feeling seems mutual from Carlisle’s and the organization’s perspectives. Carlisle said he isn’t sure Noel needs to add 15-20 pounds, but the coach does believe Noel will add more muscle.

Now all the Mavericks and Noel need to do is agree to a long-term contract, which should happen by early July.

“I’m excited about him,” Carlisle said. “From afar, he was always a guy that I was enamored with with his ability to deflect balls and make plays at the rim at both ends of the floor.”