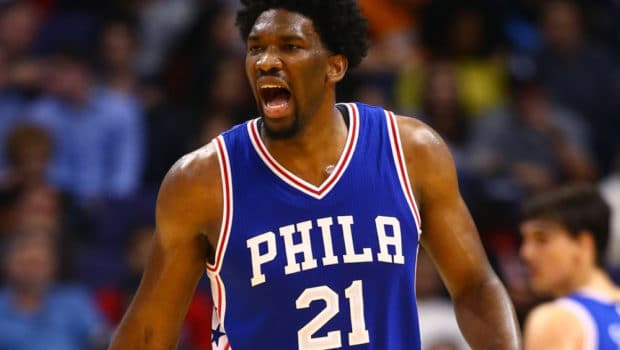 HERE’S WHAT THE SIXERS SHOULD DO TO SURROUND EMBIID AND SIMMONS!

The Sixers are a much better team than they have been in at least three years — with stars Joel Embiid and Ben Simmons when he returns from injury — and a handful of good ones.

Under big boss Bryan Colangelo, the Sixers added Sergio Rodriguez to actually run a real NBA offense and Gerald Henderson as a veteran shooting guard option were signs the Sixers wanted to actually look like a proper basketball team for the first time in a while. Trading Jerami Grant for Ersan Ilyasova and a conditional first-rounder (which may convert to two second-rounders) was a move right in line what the Sixers have been doing previously.

Even so, the Sixers now have a bit of a mess to clean up, since in the last four drafts they’ve selected three centers in Embiid, Jahlil Okafor and Nerlens Noel and two other frontcourt players in Dario Saric and Simmons in the first round.

Simmons may play a point guard role in the offense running pick-and-rolls when he gets back on the floor, but he’s not going to defend any of the quicker guards, making him a power forward (or someone you hide on a non-threatening wing) in most lineups.

The analytics have shown that the best strategy for teams in the draft is to not care about positional overlap and just go for the best player, but Sam Hinkie may have pushed that philosophy a bit far, and in part the Sixers were unlucky the best player available to them was a big.

It’s easy to criticize team’s draft decisions in hindsight, but at the time of the 2015 draft, for example, selecting Kristaps Porzingis with the third pick would have been quite controversial, and probably the best player selected after that was Myles Turner. Both are big men, though Porzingis plays power forward it’s likely he’ll be eventually better at center as well.

That doesn’t mean the Sixers didn’t have opportunities to select wings and guards. Michael Carter-Williams was selected four picks before Giannis Antetokounmpo. Zach LaVine went a pick after Saric in 2014, and Gary Harris and Rodney Hood not long after that.

Almost every team has more misses than hits in the draft, and it’s somewhat unfair to point to players who, to one degree or another, surprised everyone. But if the strategy is to build through nothing but the draft, you have to hit. Teams get one first-rounder a year, and maybe acquire another through trade, and with those one or two chances over the course of multiple years there has to be success if no other avenue to being a good team is being pursued.

Now Noel desperately wants out of Philly, and Okafor with Embiid hasn’t worked together so far. Both need the ball in the post, and there’s just no way to have a good defense playing Okafor next to another traditional big. In 80 minutes with Embiid and Okafor on the court together, the Sixers have been outscored by a ridiculous 21.5 points per 100 possessions.

Okafor, despite his flaws rebounding and defensively, is a really talented player, and just two years ago Noel was a favorite among the basketball analytics crowd due to his defensive versatility.

Saric has been pushed to small forward minutes with Brett Brown trying to open up front court minutes, and he has no chance of guarding anyone on the wing.

If Embiid hadn’t broken his foot, he would have been the first pick in the 2014 draft, and after missing two full years before playing a single game, it’s a miracle he’s been able to prove why in less than half a season.

The Sixers are still limiting Embiid’s minutes, but the raw numbers are staggering. Per 36 minutes, Embiid is averaging 27.3 points, 10.8 rebounds, 2.5 assists, 1.0 steals, 3.5 blocks and 40.3 percent on three-pointers taking 4.3 per contest. All of this on an above average 57.5 True Shooting Percentage and a 35.9 Usage Percentage, making Embiid the player with the third highest usage rate in the NBA only behind Russell Westbrook and DeMarcus Cousins.

For now, Embiid has managed to avoid the trap that nearly every young player putting up big stats falls into – which is that the numbers aren’t translating in the the plus/minus splits.

Andrew Wiggins is in his third season, and still the advanced stats recognize that he’s a terrible defender and doesn’t actually make the offense better by as much as you’d think. The Sixers have been 7.1 points per 100 possessions better with Embiid on the court, a nice figure considering Embiid’s plus/minus is being destroyed by playing together with Okafor right now.

Embiid is already a very good player, and in larger minutes should warrant consideration for an All-Star spot.

Consider everything Embiid has going against him and how he’s succeeding. Two years of not playing basketball, playing in bad lineups with not much shooting. Turning that into an All-Star level 22.7 PER using over a third of his teams’ possessions, which then is translating nicely into team success. (Philly has played at a .500 pace for most of the season with Embiid on the floor).

What’s most exciting about Embiid is that he’s already good at everything, except limiting turnovers. He isn’t like Anthony Davis or Karl-Anthony Towns in terms of switching on the perimeter, but a different type of player – a true center who is a better rim protector than either Towns or Davis already at this point.

In the post, Embiid is averaging 0.8 points per possession, which is only slightly above average, but the notable part is that he has a multiple moves and counters, from drop steps to up-and-unders, and can finish with either hand. Switching has become increasingly popular in modern defenses, but it’s impossible to put a smaller guy on Embiid without immediately sending help.