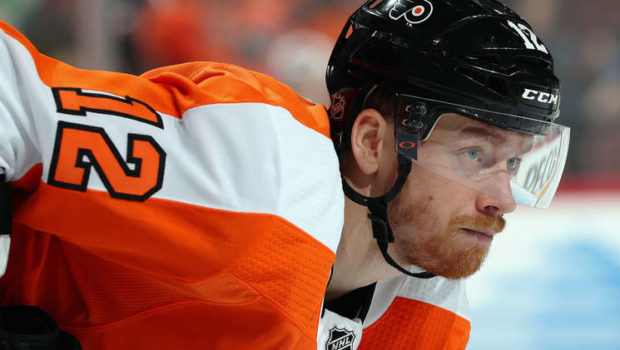 HERE’S THE POINT: FLYERS NEED JUST 1 AGAINST THE RANGERS TO MAKE THE PLAYOFFS!

The Flyers are lurching to the end of the NHL regular season with today’s 3 pm game against the New York Rangers.

If they get one point they are in the playoffs.

Should they lose the Flyers could actually find themselves playing an extra game against the Florida Panthers Tuesday to see which team moves forward.

“It’s a great feeling,” Flyers forward Michael Raffl (above) told NHL.com. “The fact that it comes down to the last game is even better. Stays exciting.”

Coming off Thursday’s 4-3 win over the Carolina Hurricanes, the Flyers (41-26-14) occupy the second wild-card spot in the Eastern Conference. They are one point behind the New Jersey Devils, who hold the first wild card, and the Columbus Blue Jackets, who sit third in the Metropolitan Division.

The Panthers are four points behind the Flyers, but have two games remaining, against the Sabres and Bruins. It is conceivable that by Sunday night, the Flyers and Panthers could be knotted up even with the tiebreakers, thus forcing a playoff.

“Obviously you would have liked to have clinched by now, but if we win (Saturday) or get a point, we’re in,” defenseman Andrew MacDonald said. “We control everything. Obviously, we have to go out and get the job done. … The boys are looking forward to the opportunity.”

“I thought he did a real good job,” Flyers coach Dave Hakstol said. “It was good for him to get that game under his belt. I thought he played hard for his teammates and vice versa, and we got the good result.”

Sizzling Claude Giroux had a goal and an assist and has 16 points (five goals, 11 assists) during a nine-game point streak

Henrik Lundqvist will start for the Rangers (34-38-9), who will close out a season that saw a perennial playoff team slump badly before being broken up near the trade deadline.

The Rangers lost to the Islanders 2-1 on Thursday night and are 1-4-1 in their last six games, though they are a surprising 7-8-3 since the Feb. 26 trade deadline passed.

Ironically, the Rangers traveled to Philadelphia needing a win in the final regular-season game in 2010 to make the playoffs and lost in a shootout after Lundqvist made 46 saves in regulation.

“For us who were there, I think going into (Saturday), we want to play a really strong game, for ourselves and also for that reason,” Lundqvist told the New York Post. “They got a big win at a crucial time that time. We’re going to play a desperate and a really good team (Saturday).”

For coach Alain Vigneault, whose future is in question along with many of the players, Saturday is about finishing on a high note.

“At the end of the day, we’ve talked about doing our jobs right down to the end, since we’ve been eliminated, and that’s what we’re trying to do,” Vigneault told the Post. “We’re going to go to Philly and try to win a game.”