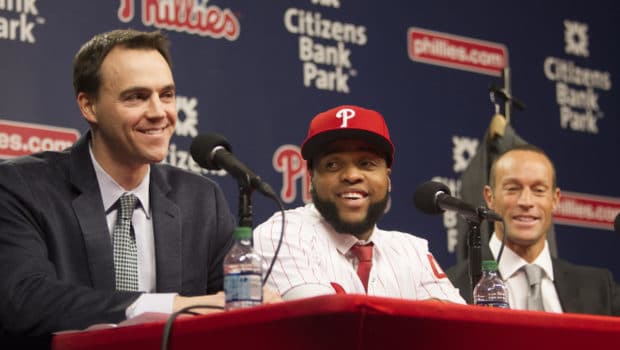 HERE’S THE PHILLIES’ STATE OF PLAY HALFWAY THROUGH THE OFFSEASON!

It’s halfway through the offseason, so let’s summarize how the Phillies have done:

Three years for $60 million with a club option at $17.5 million is short enough that there’s nearly no risk barring a complete face-plant. It’s mutually beneficial. Santana will be 32 shortly after opening day; he’s not svelte; but spending three or four years in Philly grants him another chance at free agency when he can become a full-time DH in his mid-30s.

His numbers aren’t dominant, but he will hit the ball out of the park, take his walks, and play decent defense at first base. He’s well-liked in the clubhouse and has played in 152 games or more in every season since 2011 except for one. In that one season, he played in 143. As a switch-hitter in hitter-friendly Citizens Bank Park, he’ll boost his power numbers from what they were with the Cleveland Indians.

These have the hallmark of the new stat-savvy regime led by general manager Matt Klentak and manager Gabe Kapler. They offer more evidence of hedging. Rather than spend the big money on relievers as the Colorado Rockies did by giving $27 million each to Bryan Shaw and Jake McGee, and to pay Brandon Morrow $21 million as the Chicago Cubs did, or go the lower-level route as the St. Louis Cardinals did by giving $11 million to Luke Gregerson and the New York Mets did in their $14 million deal with Anthony Swarzak, the Phillies signed Hunter and Neshek for two years each and approximately $34.25 million in total. That’s around what a team will end up paying Addison Reed for three years, and significantly less than Wade Davis is likely to get.

Neshek has been durable and consistent for his career and was excellent in his half-season with the Phillies before being traded to the Rockies. Hunter has become an underrated reliever since making the permanent shift to the bullpen with the Baltimore Orioles in 2013. At first glance, two years and $18 million looks like a club overpaid for a converted starter because Hunter has bounced around a bit, but when examining his production, it’s in line with the market.

The Phillies already have some big arms in their bullpen in Hector Neris and Edubray Ramos. Neshek and Hunter add veteran depth.

The Phillies acquired a Double-A pitcher Enyel De Los Santos for Galvis, but this was a simple clearing the path maneuver. Galvis is useful enough and has discovered more power than anyone could have predicted he’d have, but he was an extra guy to the Phillies. Top prospect J.P. Crawford plays Galvis’s position of recent years, shortstop. Cesar Hernandez (whom the Phillies are also listening to offers for, albeit at a very high price) is at second base. Minor league second baseman Scott Kingery is knocking on the big league door. With Galvis set for free agency after 2018, it was preferable to trade him now.