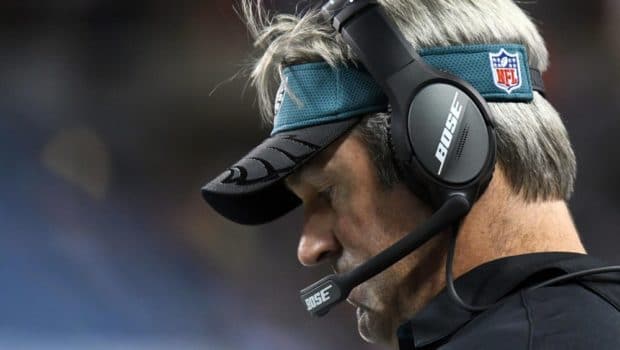 HERE’S HOW PEDERSON EXPLAINED HIS BUBBLEHEADED DECISION TO GO FOR IT AT 4TH AND 8!

So, Doug Pederson, how would you explain your bubbleheaded decision to go for a first down when the Eagles had a 4th and 8 at the Giants’ 43 and the Eagles holding a 7-0 lead with 2:36 left in the first half? QB Carson Wentz was sacked and the Giants took over at the 49.

Pederson;s bacon was saved by the Birds’ stiff defense.

Here’s what he said after the game:

It was something that I discussed with the guy that’s helping me upstairs with some of the analytics and where we were on the field, what we were doing offensively at the time,” Pederson said. “The defense was playing extremely well. Had an opportunity to keep ourselves on the field at that time, so I elected to go for it at that point. Obviously, we didn’t get it and the defense held. … I stand by my decision.