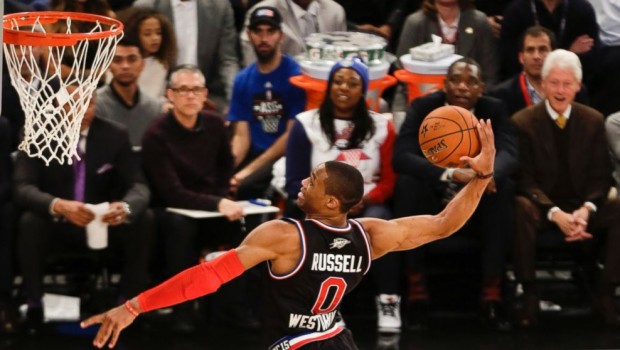 HERE’S WHY THE NBA ALL-STAR GAME IS A FARCE

In case you missed it, the West beat the East in the NBA All-Star game Sunday night in New York, and Russell Westbrook again showed why he’s the best point guard in the NBA. Points: He had 41, one shy of Wilt Chamberlain’s record of 42 in 1962, the year he scored 100 in one regular season game and averaged 50.4 points per game for the Warriors of Philly.

His 41 points were enough, however, to lead the West to a victory, which allowed Westbrook to take home the game’s MVP honors.

“Definitely a blessing, man,” Westbrook said afterward. “You never want to take no games off, especially an All‑Star game to get a chance to go out and show your talents. I’m blessed to be able to play the game that I love and definitely happy we got the win.”

LeBron James appeared to be in the hunt for the MVP early on, scoring 15 points on just nine shots in the game’s first eight-and-a-half minutes. But with the East trailing by as many as 20 points in the first half, it would be difficult for him to win it if his team lost the game in blowout fashion.

It became a one-point game by halftime, though, and remained close the rest of the way — meaning the MVP race remained tight, as well.

That may have been the reason that Westbrook was denied the chance to gun for Wilt’s scoring record of 42 points. His teammates seemed unaware that he was so close, with possessions getting drawn out until the shot clock wound down, and with little emphasis being placed on getting the ball to Westbrook in the game’s closing minutes. And more than one of them confirmed it afterwards.

“We had no idea,” James Harden said. “We were trying to go out there and win the game. It’s all about bragging rights for the West, and so we just go out there and play hard enough in the fourth quarter and come out with the victory.”

Westbrook, however, said he did find out about it in the game’s final minute. But he was with his teammates in keeping the focus on the win instead.

“Somebody told me, but at that time we were just trying to find a way to win the game and find a way to close the game out,” Westbrook said. “But I missed about six or seven layups. I definitely could have had it.”

What he ended up with instead was the game’s best overall performance — and one that drew the praise of the man that is recognized by most as the league’s best player.

“I think Westbrook came for it from the start,” LeBron James said. ‘He’s unbelievable. He’s an unbelievable talent in our league. His motor, his athleticism, his demeanor about how he approaches the game, it’s all great. And it’s great for our league. He showed that tonight, and showcased it on a big stage.”