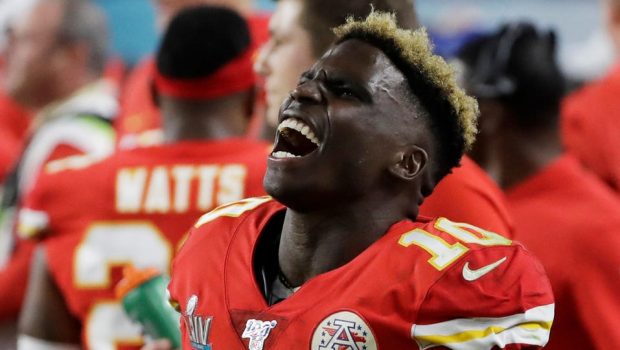 HERE’S MAHOMES TO HILL ON 3RD AND 15: BIGGEST PLAY OF THE SUPE!

Down, 20-10, and facing a third-and-15 halfway through a fourth quarter that would define their season, Pat Mahomes struck.

With the pocket collapsing around him, he chucked an impossible-looking throw 44 yards to a wide-open Tyreek Hill, for a completion that saved the Super Bowl.

A minute later, the Chiefs scored their first touchdown since the first quarter, and seven minutes later, they won their first Super Bowl in 50 years, a 31-20 win over the stunned San Francisco 49ers.

“That team doesn’t do it every single drive, but it was a matter of time,” 49ers Coach Kyle Shanahan said after the game. “They got a lot of plays.”

.@chiefs v @49ers #SBLIV found a spark on this 3-15; the biggest play in the game. When they needed it most. @cheetah might be the only Wr in the league to cover this much ground this fast. #BaldysBreakdowns pic.twitter.com/E4V0EHALfA