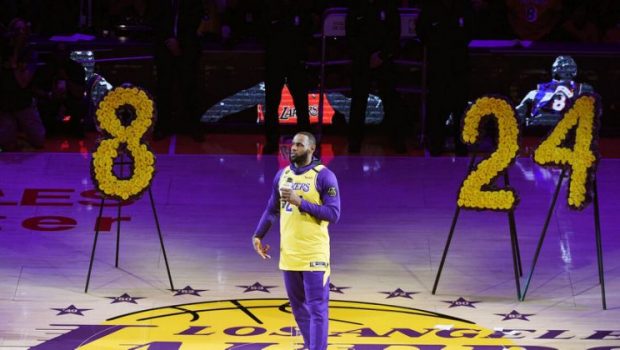 LeBron James trashes his notes and speaks from the heart to honor Kobe Bryant, his daughter Gianna and the seven other victims of the tragic helicopter crash:

Grieving fans packed almost every Staples Center seat 30 minutes before tipoff last night to ensure they didn’t miss a second of the Lakers’ heartfelt pregame tribute to their fallen icon.

The homage to Bryant began with the arena lights dimming as familiar chants of “Kobe” and “M-V-P” rained down from the rafters. A spotlight then revealed Usher at mid-court and the R&B star sang an emotional rendition of “Amazing Grace.”

A video montage of Kobe’s life then aired on the scoreboard with the former Lakers star himself providing narration via interviews culled from throughout his life. At the end of the video, Lakers public address announcer Lawrence Tanter referenced each of the nine victims of Sunday’s helicopter crash and then called for 24.2 seconds of silence, 24 for Kobe, of course, and 2 for his daughter, Gianna, whose basketball teammates were sitting courtside Friday night.

The tribute concluded with LeBron James grabbing the microphone, scrapping the speech he had prepared and speaking from the heart. In an eloquent four-minute speech that struck all the right notes, LeBron called on Lakers fans to stop grieving for the next few hours and to celebrate Kobe’s remarkable life.

The Lakers added to the reverential ambience by laying yellow Kobe shirts across every chair, half bearing No. 8 and half No. 24. Players warmed up in those shirts before tipoff as images of Kobe, Gianna and the seven other victims flashed across the scoreboard overhead.

On the right shoulder of their jerseys, the Lakers wore black KB patches, an insignia also emblazoned on the baseline at both ends of the floor. Two floor seats across from the Lakers’ bench remained empty in honor of Kobe and Gianna, one with his No. 24 jersey draped over the back and the other with her No. 2.