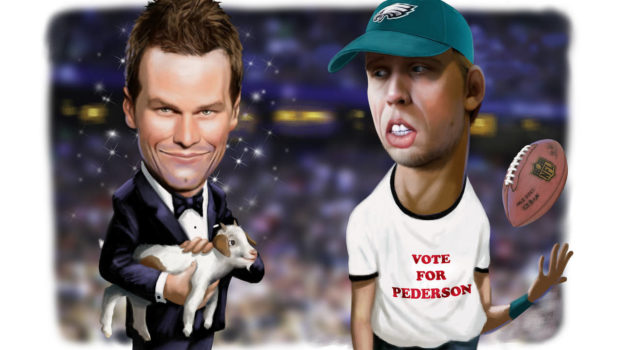 Tom Brady ($17,000 on FanDuel and $15,500 on DraftKings) has scored at least 19.6 Fantasy points in both of his playoff games (his point total was the same on both sites), but this is a tough matchup against the Eagles. Philly has not allowed a quarterback to throw multiple touchdowns in four games in a row and has four interceptions over that span.

However, those four games were all at home against Oakland, Dallas, Atlanta and Minnesota. In three prior games on the road at the Seahawks, Rams andGiants, Russell Wilson, Jared Goff and Eli Manning combined for 860 passing yards, eight touchdowns and one interception.

In Brady’s seven career Super Bowl games, he is averaging 296 passing yards and has five games with multiple touchdowns, including three in a row.

Nick Foles ($13,500 on FanDuel and $12,800 on DraftKings) just had one of the best games of his career against the Vikings in the NFC Championship Game with 352 passing yards and three touchdowns, and the Patriots have allowed three quarterbacks in their past six games to pass for at least 250 yards and two touchdowns, including Jay Cutler in Week 14, Ben Roethlisberger in Week 15 and Marcus Mariota in the divisional round of the playoffs.

In five starts for the injured Carson Wentz (torn ACL), including the playoffs, Foles has two games with at least 25 Fantasy points on either site and three games with fewer than 10 points: