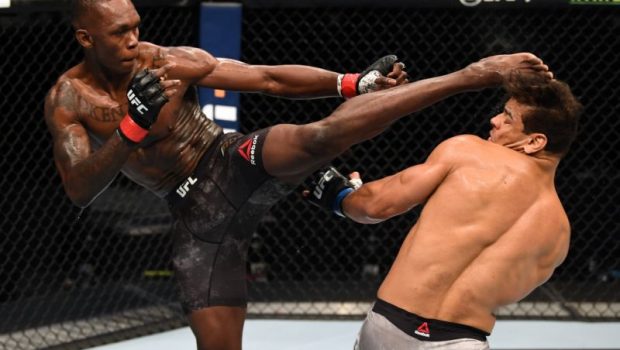 Israel Adesanya made quick work of Paulo Costa, knocking the unbeaten Brazilian out at 3:59 of their fight for the middleweight title in the main event of UFC 253 at Flash Forum in Abu Dhabi.

Adesanya’s kicks tore Costa apart and it started at the opening bell. Adesanya was barely touched in the fight and left Costa a mess.

The beginning of the end came when Adesanya hit Costa with a kick to the head. He set it up by going after the legs repeatedly early.

After the head kick, Adesanya caught Costa with a left hand that dropped him. Adesanya fell into mount and a few hammer fists later, referee Jason Herzog pulled him off and the celebration was on.

“I’ve been telling you guys,” a jubilant Adesanya said in the cage. “Like [boxer] Roy Jones said, ‘Y’all must’ve forgot.’ Y’all must’ve forgot because of what happened last time [in a win over Yoel Romero]. Oh, ‘He’s so boring.’ And I see you media people, as well, with your little clickbait headlines.”

The headlines after this one are all going to be about Adesanya’s greatness. This was his 100th victory in combat sports. He is 20-0 in MMA, including 9-0 in the UFC. He was 5-1 as a boxer and was 75-5 as a kickboxer.

He’s lapped the field in the UFC already and is setting himself up for a long reign on top. He’s got the size and the reach, an incredible variety of strikes and his fight IQ is second to none.

“I told you guys, Anderson Silva left a great legacy and I wanted to do service to the middleweight division,” Adesanya said. “That’s a hard act to follow, but we’re doing the work.”

He said he wanted to fight Jared Cannonier, who fights former champion Robert Whittaker at UFC 254 on Oct. 24, if he wins.