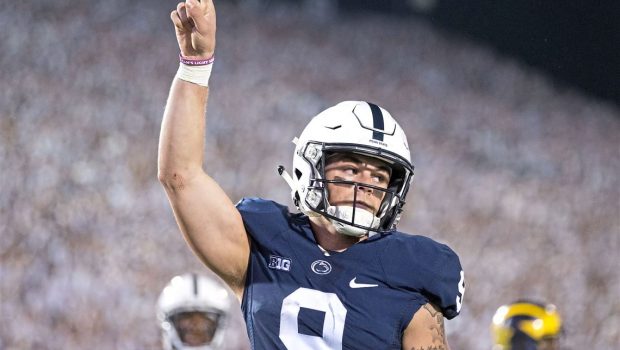 Penn State is not only undefeated at 4-0, but it also has the No. 1 offense in the nation, averaging 55.5 points per game.

Through the first four weeks of the season, the Nittany Lions have romped over teams, outscoring their opponents 222-78. Penn State did have a scare in its season opener vs Appalachian State. The Mountaineers put in a tremendous fourth quarter, scoring 28 points to tie the game at 38 and force overtime. App State had an opportunity to win the game with a 56-yard field goal attempt with 15 seconds remaining in the fourth but missed. Penn State scored first in overtime and intercepted Zac Thomas in App State’s attempt which ended the game 45-38.

The Nittany Lions lost a major playmaker on offense to the 2018 NFL Draft in Saquon Barkley. However, it appears that Penn State has found a suitable replacement in Miles Sanders. The Pennsylvania native has rushed for 495 yards this season, the sixth-most in the nation, and he has added five touchdowns. Penn State has senior Trace McSorley (above) at the helm. He has thrown for 763 yards with eight TDs and two interceptions while adding 235 rushing yards with six TDs on the ground.

There’s no question that Penn State can run up the score in a hurry. Its biggest hurdle is its defense. Allowing 38 points to App State and 24 to Illinois last week, it’s just a wonder what the Ohio State offense can do against this suspect defense:

The biggest College Football game of the weekend pits Ohio State against Penn State with a potential CFB Playoff spot on the line.

Will the Buckeyes continue their dominance of the Nittany Lions tomorrow?https://t.co/VmP3dz8hAM