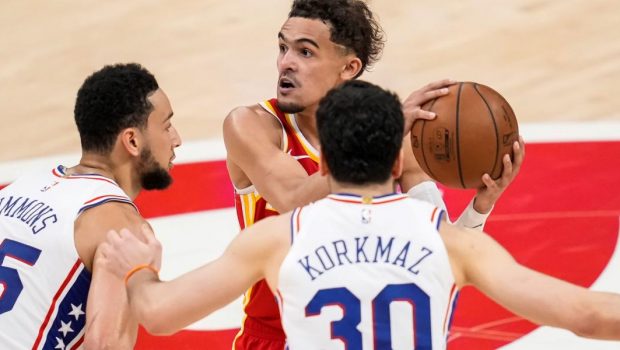 HERE’S HOW THE SIXERS ADJUSTED TO STOP TRAE YOUNG IN GAME 3!

Simmons finished second to Utah Jazz center Rudy Gobert, first among perimeter defenders by a wide margin, and Friday’s calf injury to Danny Green may even force Rivers to start all three of his defensive weapons in Game 4.

If Young does navigate the blitz, the shot clock is ticking later than usual.

Embiid’s athleticism to defend in space and recover to the rim for protection allows the Sixers’ wing defenders to stay home, closing Young’s release valves.

As a result, a Hawks team that had averaged 11 corner 3-point attempts in their first six playoff games were limited to five total in the last two losses.

“There is no kick-out option there,” Bogdanovic told reporters after Friday’s loss.

76ers adjust on the Double Ballscreen for Trae, switch to Weak like I had previously mentioned teams doing: pic.twitter.com/mce1BPDTbg