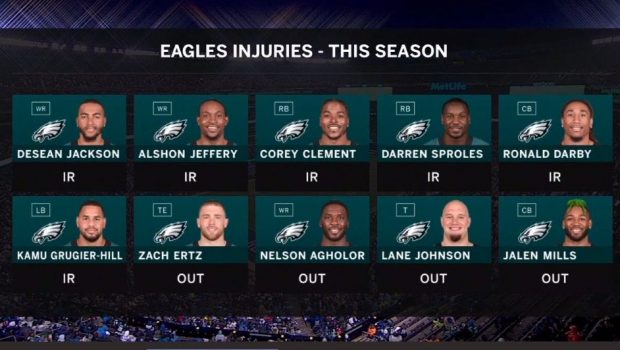 HERE’S HOW MANY EAGLES HAVE BEEN INJURED THIS SEASON!

If you’re wondering how banged up the Eagles are going into this game, suffice to say that they clinched the NFC East on Sunday with Carson Wentz throwing to a glorified roster of practice squad players, and that’s not even an exaggeration.

Boston Scott, Greg Ward and Deontay Burnett all played big parts in Philly’s Week 17 win over the Giants and they all spent part of the season on the practice squad.
It’s kind of fitting that Philly is playing Seattle this week, because the Seahawks might be the only team in the playoffs that’s more banged up than Philly. You know you’re desperate for help when you’re calling a 33-year-old running back who has been retired for 14 months, and that’s what the Seahawks did when they called in Marshawn Lynch.

There’s no NFL team that plays better as an underdog than Philly.
Click Here To Comment
0 admin January 2, 2020 Eagles