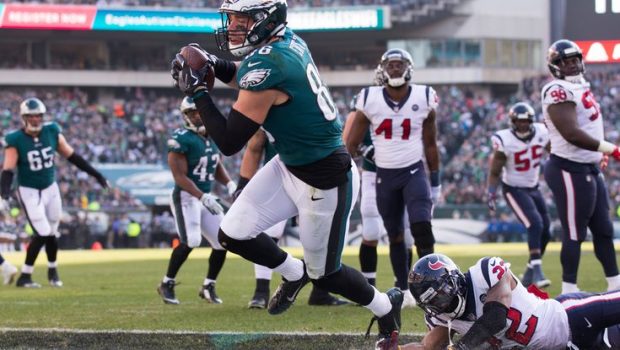 HERE’S HOW EAGLES STACK UP IN NFC PLAYOFFS RACE!

Just in case you slept through yesterday’s NFL games:

The Eagles beat the Texans 32-20 and the Dallas Cowboys slogged through Tampa Bay 27-20 to clinch the NFC East.

So here’s the state of play in the race for the six NFC playoffs spots:

EAGLES (8-7, 26.2 percent chance): The Eagles need some help. They’ll clinch a wild-card spot if they win in Week 17 against the Redskins and the Vikings lose.

The road to the Super Bowl in the NFC will go through New Orleans, the same formula that led the Saints to Super Bowl XLIV. Sunday’s comeback victory over the Steelers locked the Saints into the No. 1 seed with home-field advantage throughout the NFC playoffs. They would win the head-to-head tiebreaker with the Rams if it came to that.

Next up: vs. Carolina Panthers

The Rams’ win Sunday kept them on track for a first-round bye in the playoffs, but they won’t be able to clinch it until Week 17. Why? The Bears remain one game behind and would win the head-to-head tiebreaker with the Rams if it comes to that. So the Rams will need to win in Week 17, or have the Bears lose, to ensure a week off.

Next up: vs. San Francisco 49ers

Sunday’s win over the 49ers means the Bears will be no worse than the No. 3 seed in the playoffs. They could still move up to No. 2 and receive a first-round bye if they win in Week 17 and the Rams lose. Had the Saints lost Sunday, the Bears would have entered Week 17 with an outside chance to actually clinch home-field advantage. Alas.

Next up: at Minnesota Vikings

The Cowboys are your NFC East champions. They finished the game with a slight chance to move up to the No. 3 seed, but the Bears’ victory in San Francisco squashed it. The Cowboys will be the fourth seed and will host the No. 5 seed on wild-card weekend.

Next up: at New York Giants

The Seahawks clinched a playoff spot Sunday night after defeating the Chiefs. Their seeding will be determined in Week 17. A win or a loss by the Vikings will lock them in at No. 5. But a loss, combined with a Vikings victory, would put the Seahawks at No. 6.

Next up: vs. Arizona Cardinals

The Vikings did their part Sunday by winning in Detroit, but they were unable to clinch a playoff spot because of the Eagles’ victory over the Texans. So they’ll move on to Week 17 needing either a victory or an Eagles loss to ensure a playoff spot. The Vikings are also still alive for the fifth seed and would get there with a win combined with a Seahawks loss in Week 17.

Next up: vs. Chicago Bears