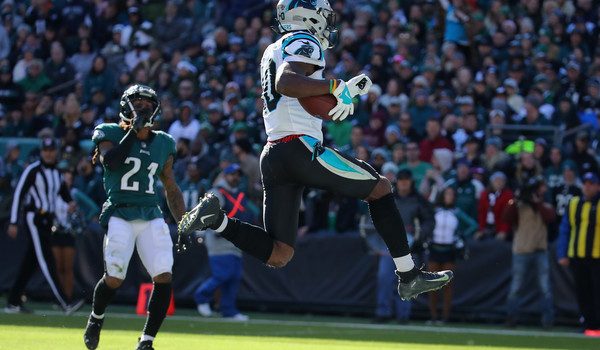 HOW THE EAGLES CAN ADD A BURNER AND DITCH SID JONES!

Sources told The Athletic’s Joseph Person that the Panthers aren’t shopping Samuel, but they might consider moving him for the right offer.

Would this proposed deal be strong enough? Maybe. The case for the Panthers would be that they just signed wide receiver Robby Anderson in free agency and already have D.J. Moore. Christian McCaffrey’s 142 targets last year were tops on the team and eighth league-wide. Do the Panthers see Samuel as a key part of their future? If not, he’s entering the final year of his deal, and they might want to get something back for him.

As for the Eagles, they have not added a single wide receiver this offseason and appear to be banking on the draft. But as mentioned, wide receivers taken in the first and second rounds over the last five seasons have averaged just 459 yards as rookies. The Eagles need to set the floor at the position and can’t afford to go into next season with DeSean Jackson, JJ Arcega-Whiteside, Greg Ward and a rookie.

Samuel will be 24 at the start of next season. He has 4.31-second speed in the 40-yard dash and could line up outside or in the slot in the Eagles’ offense. Samuel caught just 51.4 percent of his targets last season but finished with a career-high 54 catches for 627 yards. He’s due just $1.2 million in the final year of his rookie contract.

As for Jones, he’s battled injuries and played in just 22 games in his first three seasons. There’s no guarantee he’d be a useful answer at corner for the Panthers, but they lost James Bradberry in free agency and could use some options at the position. Jones will be 24 at the start of next season and at least offers starter upside. The Eagles could give the Panthers the option to take corner Rasul Douglas instead.

It’s hard for me to believe the Eagles are going to go into the draft without adding a wide receiver. The Panthers can take a flier on a young player at a position of need in Jones and add a third-round pick (No. 103).