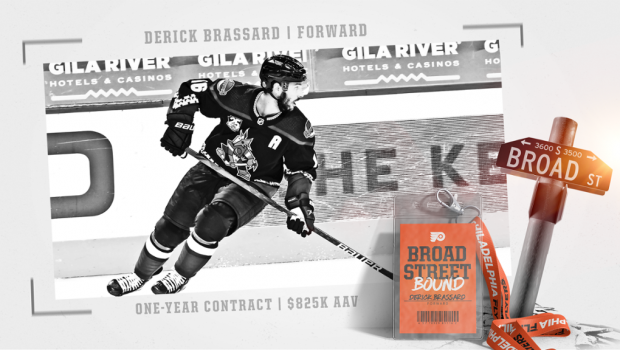 The Flyers signed center Derick Brassard the other day, and the question is whether or not he will help very much.

But he was a Flyers Killer, so at least they got him off the ice as an opponent.

Brassard has played under Flyers coach Alain Vigneault in the past, and he brings extensive playoff experience to the table and has that leadership intangible that GM Chuck Fletcher sure seems to have prioritized this offseason. But can he still provide actual on-ice value, despite the fact that he turns 34 in September?

To answer that question, it helps to understand the trajectory of Brassard’s NHL career.

For years, Brassard was a quality top-six center, scoring at a 0.64 point pace (about 52 points per 82 games) over a six-season prime from 2010 through 2016. But a 2018 deadline trade to the Penguins stands as the turning point of his career. He started strong, scoring eight points in 14 games to close out 2017-18 with Pittsburgh, but his 2018-19 was a disaster. He struggled mightily with the Penguins and was ultimately traded twice before the season concluded, first to the Florida Panthers and then to the Colorado Avalanche. Location didn’t matter, though. Brassard was a non-factor everywhere, finishing the season with just 23 points in 70 games.

That ended his days of being a big-money, coveted-by-the-market forward. In 2019, it took until August for Brassard to sign a one-year, $1.2 million deal with the Islanders. In 2020, he wasn’t added by the Coyotes until December — and only for $1 million on another single-year term. Now, he’s lasted until August once again, and the price tag has dropped even further. Brassard is now the veteran who gets signed for depth when all the big free agents are gone.

But here’s the thing: In the wake of his debacle of a 2018-19 season, Brassard has actually been a decent player, at least by the numbers.

He’s clearly not the scorer he once was. That didn’t come back. But 2018-19 does look like a one-off dumpster fire of a season in terms of his on-ice impact. Brassard definitely has lost a step, but not to the point where he’s getting obliterated at even strength and lacks any value whatsoever. He appears to still be useful.