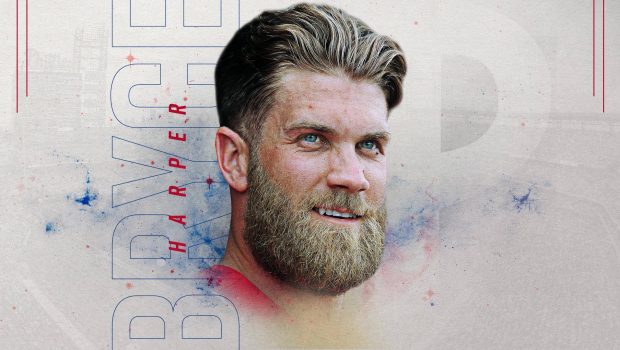 HERE’S HOUR-BY-HOUR, 6-DAY JOURNEY THAT MADE HARPER A PHIL!

The most expensive deal in baseball history took root in a casino.

The Phillies’ last best chance to woo Bryce Harper took place amid the high-backed gold leather booths and white linens of Carbone, a restaurant in the ARIA resort and casino in Las Vegas that imbues the feel and fragrance of mid-century Hollywood. When it comes to the rare baseball player with star power, a location scout could not do much better for glamour and showmanship to set the scene.

It was a Friday night, Feb. 22, when Phillies owner John Middleton and his wife, Leigh, met with Harper and his wife, Kayla, and his agent, Scott Boras, at Carbone. It was Middleton’s third trip to see Harper in Las Vegas.

Philly had been the most aggressive pursuer all along, but fancy linen or not, Harper and Boras were not there to compromise. They wanted to top the $325 million contract of Giancarlo Stanton, the existing record, and they needed three more years out of Middleton to get it done.

Harper, 26, had given Boras strict instructions at the start of his free agency: prioritize length of contract, and don’t bother even asking for opt outs.

“It was not only important not to have an opt out, he refused to allow me to do it,” Boras said. “He said, ‘I want to be with one team.’ I tried to talk him out of it. He gave me my marching orders.”

“I may have said five minutes worth of words the entire time,” Boras said. “John and Leigh, Bryce and Kayla, they just talked.”

Middleton spent most of the time giving his best Chamber of Commerce speech. He talked up the Philly area’s schools, hospitals, restaurants and general quality of life. When the Phillies began their courtship of Harper back in December, they kicked it off with a slickly-produced video in which the club found as many prominent Philadelphians as possible—athletes, politicians, restaurateurs, coaches, business owners, etc.—and had them speak directly to Harper to join them in the city. The video also included marquees of local arenas with his name in lights.

Still, the Phillies were not comfortable offering Harper more than 10 years. He had neither the length nor the record dollars he wanted until the last week in February.

“It took a hell of a long time to get those [last three] years,” Boras said.

Starting with the Friday dinner, it took one last whirlwind of a week for Boras to work his stagecraft and get the years needed to surpass the Stanton contract. On Saturday the Middletons ate with the Harpers again, this time for lunch before John and Leigh zipped back to Florida on their private jet. On Sunday, with the exhaust from Middleton’s jet barely dissipated, a contingent from the Dodgers flew into McCarran Airport in Las Vegas to offer Harper a record amount of money per year, but only on a deal covering four or five years. (The top average annual value bid to Harper was $43 million; Boras would not confirm it was from the Dodgers.) On Tuesday, right behind their divisional rival, the Giants jetted in with a 12-year offer worth around $310 million. All the stagecraft had the desired effect.

On Thursday morning Middleton called Boras to offer $330 million over 13 years. Boras hung up the phone and at 11:34 am PT he called Harper. Kayla joined Bryce on the phone.